Now That We've All Calmed Down About 2010 Topps National Chicle

It seems that there are very good explanations as to why there are cards of Babe Ruth in an Atlanta Braves outfit, Ichiro in a Seattle Pilots outfit, and what could possibly be some White Sox rookie (I'll let you know who this could be later on in the article...keep reading) doing his best Frank Thomas impression in the highly anticipated, yet so far critically panned 2010 Topps National Chicle set. And while there is some logic behind these cards, because there was not a whole lot of written explanation (or a sell sheet for that matter) at the time the images cameout, everybody, including myself, jumped the gun because of the information (or lack thereof) passed on by the number one source of the hobby.

Beckett's initial article about this new product included a 330 card checklist. What probably was overlooked was the fact that of the 330, there are 275 base cards. The 275 base cards are divided into two seperate categories: 205 active players (see the Pujols card below): 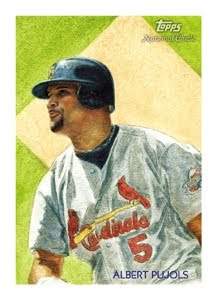 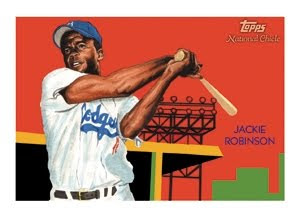 The remaining 55 cards are split between three subsets: 25 "Retired Stars," 10 "Vintage Veterans," and 20 "Rookie Renditions." However, the number one source of the hobby initially forgot to give a description of what these three subsets are about, leaving us with only images of each of the three subsets (and hobby bloggers everywhere preparing the torches and pitchforks). But thanks to the gentleman over at Field Level View, (and because I didn't see this article from the boys and girls at Beckett), there is finally an explanation.

Okay...let's bring out the offending cards shall we??? 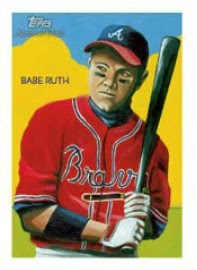 The example above of Babe Ruth in an Atlanta Braves uniform is one of 25 cards within the subset called "Retired Stars Revisited." The concept utilizes 25 retired stars in the MODERN DAY JERSEYS of a team they played for. To wit, the Babe here ended his career with the Braves...the Boston Braves. So, we see him here, looking his "Chipper" best, in the Atlanta Braves outfit. In a subsequent article written by the boys and girls at Beckett (to calm the mass hysteria, I guess), it was explained that, yes, Topps did request these kinds of cards, and that other subjects in this set would include Walter Johnson of the Washington Senators wearing a modern day Washington Nationals uniform. Does this mean we could see Ernie Banks wearing the blue alternate Cubs jersey (the one that Carlos Zambrano INSISTS on wearing, whether away or AT HOME??!), or Ryno possibly wearing a 2009 Phillies outfit??? 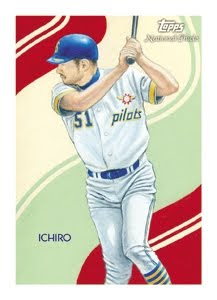 Ichiro here is one of ten players included in the Vintage Veterans subset. This puts ten modern day heroes in the jerseys of teams from a bygone era (is 1969 really bygone???) Example above of Ichiro wearing a Seattle Pilots jersey makes sense (although really Prince Fielder should be wearing this). Based on the checklist, we could see Pujols wearing a St. Louis Browns uniform, Chipper Jones wearing the Boston Braves outfit (trading off with the Babe again), Manny being Manny in a Brooklyn Dodgers uni, or even Ryan Zimmerman wearing the red, white, and blue...of the Montréal Expos!!! 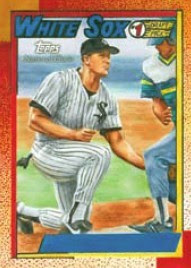 Now comes the final subset. Twenty MLB Rookie Card Logo players (most who already are in the base set) will be featured in this subset called Rookie Renditions. The concept, take these twenty green athletes, and drop them into noteworthy cards in Topps' sixty year history. The above card is of the infamous 1990 Topps Frank Thomas No-Name-in-Front (NNOF), down to the missing black border at the bottom and that blue parallelogram without a name. But instead of it being the man who would be the "Big Hurt," it's White Sox catcher/infielder Tyler Flowers (most likely him, seeing that he's the only White Sox player on the rookie checklist).

Now that we've come to an understanding about these cards, I'm starting to warm up to them. I still think there will be collectors who just hate these concepts with a passion, but most of us have extinguished the torches and put away the pitchforks. I still will wait for a complete set to show up on eBay in April and buy it then.

But you have to admit, now that we know the rest of the story, don't you feel better about the product???

It seems we all did jump the gun for the most part. The whole legends in modern uniforms really isn't a good idea, though. And let's be honest, that Ruth card is really, really ugly. The base cards are pretty good looking, but I think that the initial reaction to this set might be the beginning of the downfall of retro themed sets. Especially hand painted ones.