I only found out today that Chris Stufflestreet, writer of the blogs Vintage Sportscards and 1973 Topps Photography, passed away on Wednesday, September 19, 2012, as a result of a severe heart attack. He was 39, only three months away from his next birthday.

The Hobby Blogging Community loses a writer who was a true expert about the Hobby we all share. His insights on vintage cards were truly great to read, whether it be on his blogs, or on various message boards of which he was a member. Both of his blogs will be removed from the active blogrolls and placed in the Retired but Relevant section of the sidebar at the Sports Card Blogroll.

On behalf of the this humble, little blog, I would like to send my condolences to his family and friends. RIP. Godspeed. 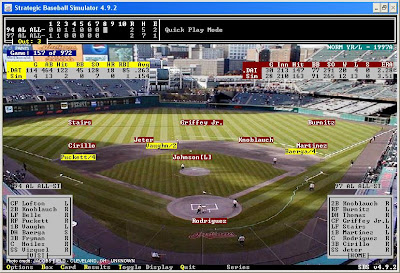 This will be the last time I discuss my unemployment on any of my blogs.  It is time to look forward, not back.  I enjoyed my time there, but it is time to move on.

With that said, I finally have all the divisions set on my .dat files, I have the stadiums set so that each pair of teams have a different home field.  It is time to play the games.

Earlier this year, I introduced all the teams that will participate in my All-Time All-Star Team Tournament.  To review, these are the rosters of the All-Star Teams that I created over the past 25 years.  You can see all the head-to-head results of each of these teams by clicking on any of the links on the sidebar.

So get out the popcorn folks.  One team will reign supreme.  Who will it be?  You will just have to find out by going to bdj610's All-Time All-Star Team Tournament to find out. 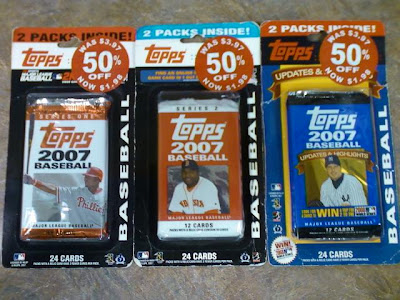 Many of my now former co-workers have said their goodbyes, and in about 10 minutes, I will be doing the same.  But before I go, I want to rip open these last two packs of 2007 Topps Updates and Highlights.