More Yankees Pies Have Surfaced. And Frankly, I Don't Care!!! 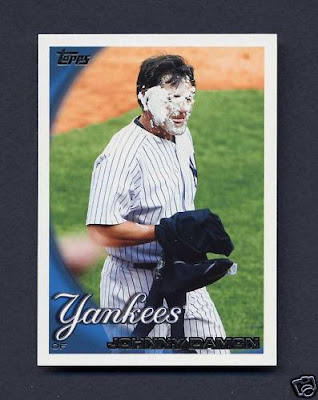 I have officially decided...I am not going to collect these Yankees "Pie in the Face" cards. It's one thing to have a variation card where the player featured is wearing a different uniform, but when your short print set is just of Yankees players getting hit with A. J. Burnett pies after a walk off win...

If Topps only did this with one player...fine. I'd go for it. But seven???

And there could be more. There were 15 Yankees Walk-offs in 2009. I mentioned it before, but others who got Pied include: Heck, even Luis Castillo of the Mets, one of Burnett's old teammates, got hit with a pie as a "Thank you" of sorts. There could be more. Or they could all just pop up here in series 1.

But frankly, I'm not going to actively hunt these down. I never thought I'd say that about a card with a base Topps design. But there. I've said it. I figure, it's a Yankee thing, Yankees fans would appreciate it more than I do. Now, I'm not saying that I don't like the look of the cards. But...I just don't care for them.

Email ThisBlogThis!Share to TwitterShare to FacebookShare to Pinterest
Labels: commentary, WHAT?

Yeah I have to agree. One of them would have been cool...but to make all of them short print, I would have mixed it up.

But I guess the Yankees are the Champs and the most popular team....so maybe a solid business move.

Screw the pies, what the motherbipper is up with all those cards from SERIES TWO?? Johnny Damon might not even have a Yankee card in series two! DAMMIT TOPPS, BECAUSE OF YOU I NOW HATE PIES AND I AM A FAT, FAT MAN WHO KNOWS HIS DELICIOUS PIE!!!

I agree with you here. This is getting a little extreme...overdone. Someday we might be referring to the 2010 Topps set as the "pie in the face set".

Topps should make it up to us by putting NO Yankees in the 2011 set.