One of my goals this year is to try and clear out the extra cards that are sitting in boxes in my basement. They don't count as part of my actual collection, and I am not counting them as part of the Card Census I'm working on to manage my collection.

And while I still have yet to find any 2015 Topps cards (I will make a trip to a Target near church...), I did finally open the 35 packs of 2013 Topps Update Series that I bought at the Dollar Tree.

Now these cards consist of 5 base cards. No inserts, no relics, no autographs. Just five cards. And with my luck, I wasn't expecting much in terms of quality hits. I mean, after all, I already have all 330 cards of the base set. What could I possibly get out of these packs?

As you may know, Topps inserted a lot...really...a lot of short-printed variation cards in the Update Series. Many of them were of the All-Star Game variety, featuring star players from All-Star Games past. Some were even super-short printed.

Now, I am not sure if I mentioned that in previous pack purchases that I did get a short print:

Neither are of the super-short print variety, nor is the Rivera from before, but they are SP's nonetheless.
I am looking to sell these babies as I have decided not to collect them. Although they are short-prints, and they are of retired All-Stars, to me, these are not even akin to the 2009-2012 short printed cards of the CMG players from 2009 through the Hall of Fame 5 from 2012 Topps Series 2.

So here is my call to sell. I'll start with this blog post, and then Twitter and Facebook to see if I can gauge some interest. I'm thinking at least $7.50-$10.00 per card would be a good starting point. If after a couple of days, I get no decent responses from either site, I'll throw them on the Bay.

I'm Sorry, The Jeter Card Sold for HOW MUCH??!

Still upset that my local big box store did not have any 2015 Topps Series 1 packs out, I drowned my sorrows at the Dollar Tree to find that, even though I thought it ended, the store was still selling certain packs for a penny.

So I got myself 35 5-card packs of 2013 Topps Update Series. I'll be breaking that shortly while biding my time, waiting for my paycheck to come next week so I can hop aboard the 2015 Topps train on the Bay.

In the meantime, while perusing the Twitterverse, the biggest casebreaker out there, brentandbecca, has been busy sorting and listing all of the cards they have from the 35 to 100 cases they open for every product (okay, that's an exaggeration, but they do bust open a ton of cases). If you want to know what almost EVERY CARD LOOKS LIKE, check their auctions on eBay.

Speaking of checking their auctions... 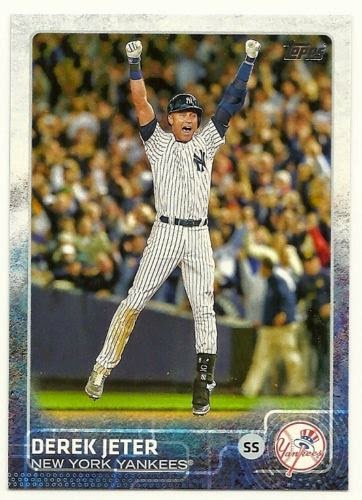 So this is Derek Jeter's final regular series Topps card. He's been in every eponymous Topps set since 1993. That gives him a staggering 23 regular Topps cards in his illustrious career. Now, I know last year's Update Series included reprints of his previous 22 cards, but they were of the framed variety and quite frankly, because they were serial numbered, not worth the time and money for me to invest. Heck, some of the reprints were worth more than the regular cards.

So brentandbecca is still sorting through their cards and he put on auction the above card.

Guess what the final price was for this one regular card? Keep in mind that this is not the SP card. There is no twinkle in his eye, (for that matter, I have no idea if he has a sparkle card). This is the base card that EVERY factory set will have when summer hits.

Just check this out: 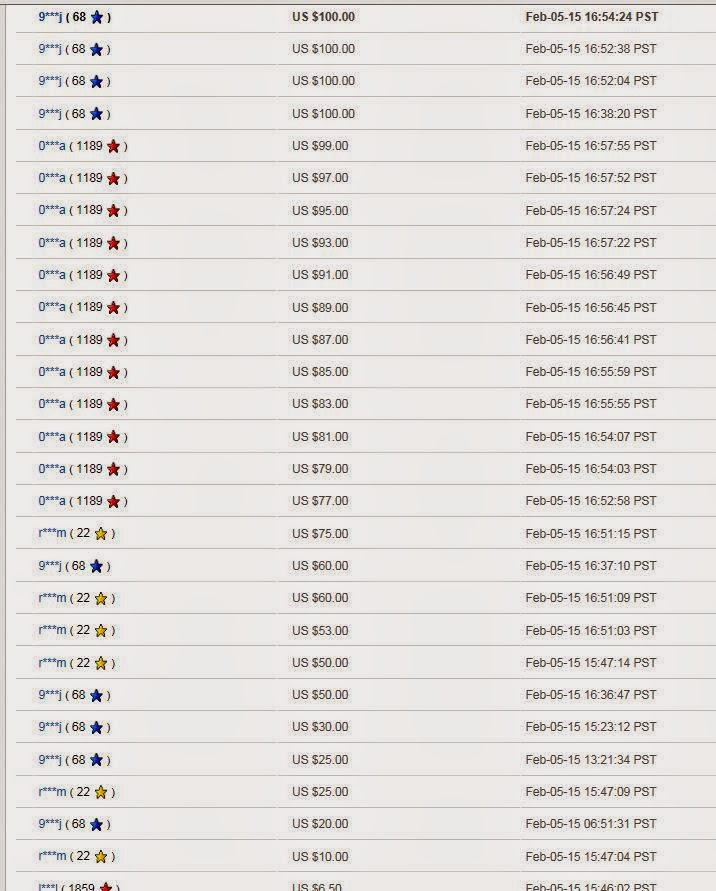 For one base card!!!

And the funny thing is that the guy who "won" the auction paid for it.

Yes, I know that the card itself has been all over the news as it is Jeter's final card. But this is a bit excessive, don't you think? Now EVERYBODY's going to want to put this card online to see if they can ride the wave of hysteria.

I'm in the wrong business.

Now I'd love to have the finances that brentandbecca have to break open so many cases. And don't get me wrong, I'd love to spend my day opening packs of cards (it's a ton of work, and I give him, his wife, and his support staff a lot of props for the work they do).

I'm just not sure if my shelves could take the weight.

JayBee Anama
Posted by James B. Anama at 9:39 PM 3 comments:

Email ThisBlogThis!Share to TwitterShare to FacebookShare to Pinterest
Labels: 2015, commentary, topps, WHAT?

Kidding. But I wish I was able to participate in the festivities!!!

I know 2015 Topps S1 is live. I've seen videos (from Keith Olbermann to Topps case breaks). I've seen Facebook posts of people breaking open packs, blasters, boxes, cases, etc. and showing off what they got. I've watched the twitter feed to see what everyone thinks of the backs (a big thank you to Sooz for being kind enough to post the back of the card so we all know what they look like - apparently, I'm the only one who wanted to see that stuff).

I've been to the Number One Source in the Hobby's site to see pictures of the short prints and sparkle cards (somewhere Stale Gum is fuming...to me, him ticked off about the cards makes it seem that all is right with the world). It looks like there are 25 SP's are included in this product (that I counted anyway) and the sparkle cards are back.

I've even gone on eBay to get an idea of what prices are going to be so that when the time (and paycheck comes), I'll have an idea of how much I plan on splurging (after bills, of course).

The cards look great. I'm just insanely jealous that my local big box store didn't have any product on the shelves today. I'm hoping tomorrow will be better.

All I've seen looks great, but I feel I can't make any comments until I have the things in my hands. 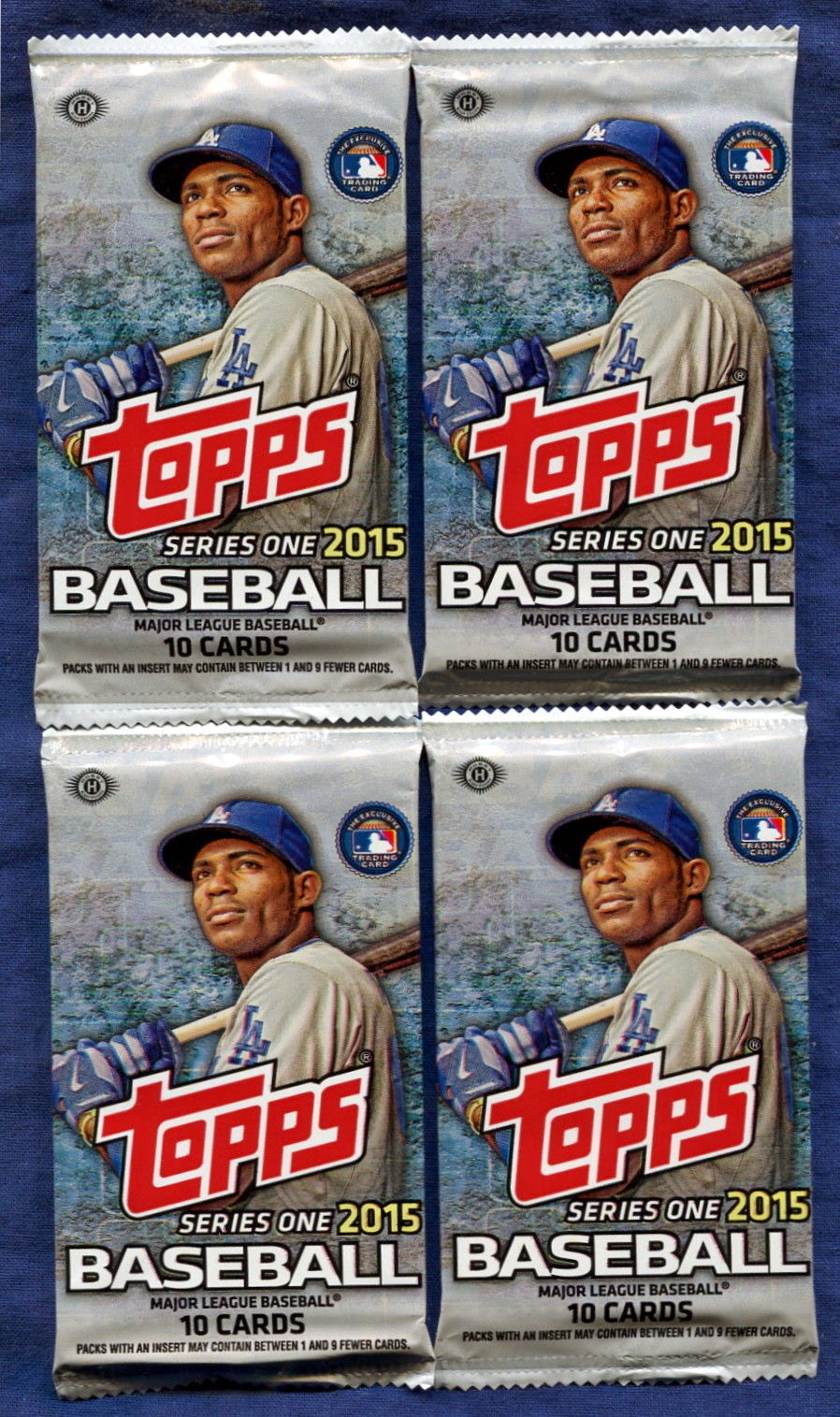