I have finally finished simulating the All-Star Games using my 1998 End of Year All-Star Teams. And once again, streaks were snapped this time around as the 1998 American League All-Stars took the seven game series 4-3 over their National League counterparts. Will this mean a win for the AL in the one-game ASG? Stay tuned.

In twelve years worth of series, the AL has a 7-5 lead. They snap a two series losing streak, and even win the ever important "anything goes" series. But they NL presently have a 6-5 lead in the one-game ASG. This seventh series seems to be a good indicator as to who wins the big one. Does this mean good luck for the junior circuit?

For the official All-Star Game, I decided to just simulate one game and one game only. The starting pitchers were Glavine and Clemens and I let them pitch two innings (unless they struggled badly). The rest of the pitchers would get one inning each (unless they struggled badly). The position players were replaced every three innings. No pinch hitters here, (as in previous tries, the pinch hitter is taken out of the game). The DH's (Tony Gwynn of the NL and Shawn Green of the AL) were never replaced.

The starting lineups, first for the National League (I'm using 1999 Topps cards because these are the cards I used to represent the players on my All-Star teams): 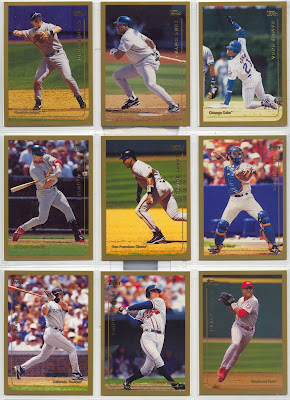 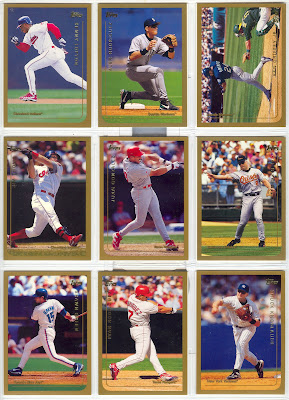 The 1998 NL All-Stars beat the 1998 AL All-Stars by a final score of 6-3 in what turned out to be another home run showcase, this time for the National Leaguers. 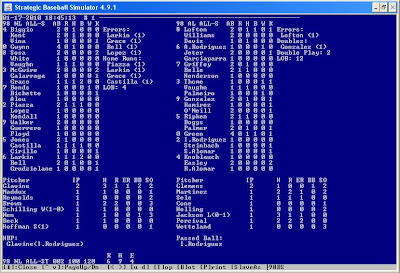 Your starters, Tom Glavine and Roger Clemens. Vinny Castilla is the MVP.
So on the strength of four home runs (Larkin, Piazza, Castilla, and Grace), the NL powers their way to victory. If this game actually existed, the MVP award would have gone to Vinny Castilla (1-1, 1 hr, 1 rbi). Curt Schilling takes the win, Mike Jackson gets the loss, Trevor Hoffman gets the save, and the only players who didn't get in the game were pitchers Jeff Shaw & Kevin Tapani from the NL and Tom Gordon & David Wells from the AL. 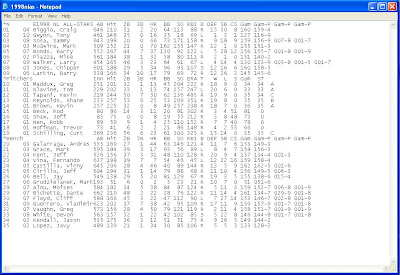 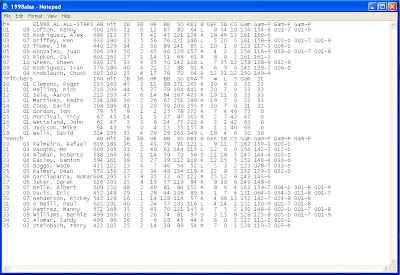 Now that the 1998 All-Star Games are officially over, at 9:00 AM CST on Tuesday, I will introduce the 1999 End of Year All-Star teams. Simulations for games with those rosters to come hopefully by Sunday night.