Because Topps decided to cut off first-year cards on their 2001 Archives set at 1985, they did not include our next subject. And that my friends, is a shame. But since we're working on the set for 10 years later, I think we should make up for that atrocity by including this player in our 2011 Topps Archives set.

There was no athlete in the world more popular than this man in the mid 80's and early 90's. He seemed to be playing everywhere. He played in Major League Baseball and in the National Football League. He was on TV, appearing in commercials that showed that he indeed knew how to play any sport. He even showed up in a cartoon series (okay, don't even think about asking me to bring up a picture of the ProStars). He was truly a sensational athlete, and had it not been for the injuries he sustained and the subsequent surgeries, this man's numbers, in both leagues, would have been astronomical. Today, we honor Vincent Edward Jackson. Or as he is known the world over as, "Bo" Jackson.

Between 1987 and 1990, Bo Jackson was a player in both MLB and the NFL. He was drafted by both the Royals and the Tampa Bay Buccaneers from Auburn University, where he was a three-sport athlete (also a sprinter on the Track and Field team). With the Auburn Tigers, he won the 1985 Heisman Trophy as the nation's best college football player. He was also to the All-District and All-Region College Teams by the College Baseball Coaches Association that year. Although Jackson made his intentions known that he wanted to play both sports, the Buccaneers insisted that he pick one sport. Not liking the ultimatum demanded by the Buccaneers, he signed with the Royals and played for them in 1986. Because Tampa Bay couldn't sign Jackson, his rights were forfeited, and his name was thrown back into the NFL draft, where he was picked by the LA Raiders. Al Davis, owner of the Raiders, liked the idea of Bo playing both sports, thus beginning his life as a professional two-sport athlete.

With the Royals, every at-bat was an event. Because with Bo, it was all or nothing. Meaning every plate appearance meant a booming home run, or a strikeout where he would break the bat with a high knee. Now this doesn't mean he was a terrible hitter. On the contrary. He was a very productive hitter with the Royals, 109 HR's and driving home 313 runs with KC. He was an All-Star in 1989, hitting both a towering home run and an infield single, driving in the winning run and help lead the AL to victory. He was named All-Star Game MVP for his performance.

When the Royals were done, off he went to LA to begin his football season.

As a Raider, he played in 38 games, ran 2782 yards (5.4 yards per carry), gained 352 receiving yards (8.8 yards per reception) and scored 18 touchdowns total. Unfortunately, he was severely injured his hip in a playoff game in 1991 that would end his NFL career and threaten his baseball career. The story goes that he was able to pop the hip back in himself. Following surgery and rehabilitation, it was discovered that he had avascular necrosis, which would require hip replacement surgery. He had it done, and promised to be back in baseball soon.

He signed with the White Sox in 1991, playing with the pain before having the surgery. He took the year off, and returned in 1993, hitting a home run in his first at-bat. He may have shown the power, but the speed was gone. One more year with the California Angels, and he decided to call it a career in both sports.

He went on to play guest roles on television and movies, and is currently the part owner and CEO of the Bo Jackson Elite Sports Complex in Lockport. (Cool, he lives in the Chicago suburbs). 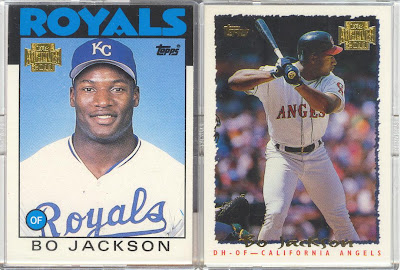 First card: 1986 Topps Traded #50T. Last card: 1995 Topps #592.
Whether playing baseball with the Kansas City Royals, or tearing up the field as a Los Angeles Raider, Bo Jackson was someone you just had to watch and be mesmerized by. He hit towering home runs, and bowled over every tackler he faced on his way to the endzone. Face it, you know, and I know, and heck, even "Bo Knows," that he should be in this set. So let's add him to the 2011 Topps Archives Set.

Even though this is a Topps blog, who could forget Bo's 1990 Score card in black and white with a bat over his shoulder pads. He did things on the Football and Baseball field that I've never seen before or since.

I remember the 1986 Topps Update set was a hot seller at the time with Bo, Bonds, Will Clark, Canseco, etc.

Uhm. How much can i sell his last card for??? i have it. is it worth anything? Email me at abelito_1991@yahoo.com if you know.. Thanks!