George Sisler...And Then There Were Eight!!!

First there was word of a 2010 Topps Robin Yount card making the rounds on eBay. Then Roger Maris. Stale Gum showed a Carlton Fisk. Cy Young showed up on the Bay. So did Christy Mathewson. Willie Stargell showed up on a Youtube video. And Jackie Robinson. 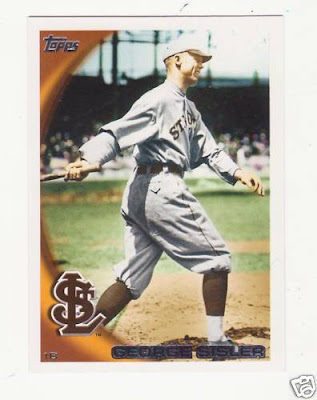 Oh yeah, the seller of this card is also selling a 2010 Topps Mickey Mantle card, selling it as a "SP?" Let's review folks that since 2006, Mickey Mantle has been on every Topps set as card #7.

IT IS NOT A SHORTPRINTED CARD!!! IT IS NOT PART OF THE SP SET!!!

Keep on finding them folks. Sooner or later, we'll know how many we'd have to look for.

There's a new addition to Ebay this evening...This SP however is of a current player, Mark Teixeira.
His regular card is #250, but a seller on Ebay has a "pie face" variation. Others on ebay, some of which you may have mentioned on your blog previously include Babe Ruth, Warren Spahn, Walter Johnson, Stan Musial, and Roger Maris. I was able to buy a Cy Young on ebay last night for $11.50 and am watching many others. I have three jumbo boxes ordered from a dealer, who tells me Topps has pushed back delivery until the first week of February. Just might have to hit up Target or Walmart, since they seem to be available there, at least in some areas. Sounds like the 58 Cards Your Mother Threw Out set might be a bit tough to complete. No so much the regular cards, but the 58 parallels that have the original backs instead of the MTO back. (One card for each year from 1952 to 2009...and yes the Alex Gordon card is the one for 2006)