For the last three years, I have been hoping to get this set completed. That's the funny thing when the last card I need has only 25 copies in existence.


Before 2005 Topps Series II hit the shelves, I was fortunate enough to get a copy of the sell sheet. Included was a section regarding Barry Bonds and to commemorate his seven MVP awards, they were issuing cards with the original Topps designs based on the years he won (1990, 1992, 1993, 2001, 2002, 2003, 2004). But instead of simply reprinting his original cards from those years, they pulled an "All-Time Fan Favorites" and issued new pictures for each year's design. You can't call them reprints. I think we can call them retroprints (if anyone can come up with a better name, please by all means be my guest to suggest one).

To make the set even more challenging, they serial numbered each of the cards:

Now, there are also autograph versions of each card (numbered 1 of 1), and relic versions (with the same numbers as the base cards...why I don't know).

I was fortunate enough that when the cards first started appearing on eBay to win auctions for the last five cards in order (7, 6, 5, 4, and even 3). I was able to get card #2 for a steal only because the seller was relatively new, had low feedback (his number has since gone up), and had no scan. I took a chance, won the auction, paid for it and got the card. (So for all of those eBayers who don't buy from sellers with low feedback...hey we all had to start somewhere right???)

So anyway, it has been two full years plus since I won card #2, and I have been online almost every day looking for card #1. Believe it or not, I have seen two auctions for the relic version of this card (#'d to 25), but have yet to see one for the base card.

Here is a picture of the other six cards. 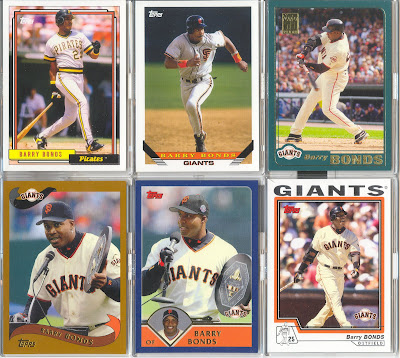 If by chance you have this card, I am willing to buy or trade for it. I want to put this set to bed once and for all. I want to be the possible first person to get all seven cards together, making my set the only one of possibly 25 in existence. Thank you very much.

Here's a link to one of his auctions: