First off all, I need players with cards from the 1950's to balance the number of players from the 80's and 90's that are going to make up the majority of this set.

Secondly, using a player like Andy Seminick forces me to do some actual RESEARCH instead of just going by memory about what kind of player he was.

Andy Seminick was a catcher for the Philadelphia Phillies and Cincinnati Reds in the 1940's and 50's. He made his major league debut in 1943 and had a very productive 15-year career. He was an All-Star in 1949, and was a member of the Whiz Kids, the collective name given to the 1950 Phillies. This team, whose players averaged an age of 26 years old, won the National League pennant and faced the mighty New York Yankees in the World Series. This team included outfielders Richie Ashburn (a 22-year old), Del Ennis (25), infielders Granny Hamner (23), Willie "Puddin' Head" Jones (24), pitchers Robin Roberts (23), Curt Simmons (21) et. al. Seminick was one of the "older players" on this team at 29 years of age in 1950.

During that magical year in 1950, Seminick hit a decent .288 with 24 home runs and 68 rbi's. He finished 14th in the MVP balloting that year. The year before, his all-star year, he also hit 24 home runs and drove home 68 runs. Talk about consistent.

At the end of the 1951 season, Seminick was involved in a seven player trade with the Cincinnati Reds. He played for four seasons with the Reds before being traded BACK to the Phillies in a six player trade.

But I have a problem.

I will put this up to a vote. Here are pictures of Andy Seminick's Topps cards. The first pair has his 1951 Topps Red Backs card paired with his final Topps card from 1956: 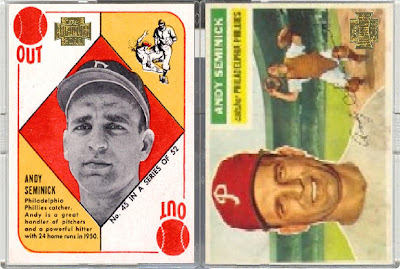 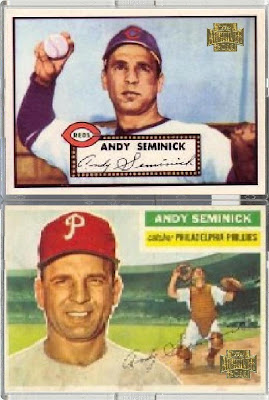 Mr. Seminick passed away in 2004. We pay our respects to one of the original Whiz Kids by adding his cards to the 2011 Topps Archives Project.

For some reason the 1951 Topps Red Back votes aren't being counted. I tried twice to vote for '51 and it kicked me back both times without counting it.

I actually mentioned Andy Seminick in passing in my post yesterday: