There is a saying that good things come in three's. In the course of major league history, one player definitely took that mantra to heart. In fact, it became an obsession with him. This guy:
Okay, it was a good thing that today's subject for the 2011 Topps Archives project was such an incredible player that he was able to get away with a lot regarding his number "3," otherwise I'm pretty sure his managers would have asked to put a top to it. If you haven't guessed by now, today's subject is a six-time all-star, seven-time Gold Glove winning outfielder, three-time Silver Slugger, and even an MVP winner (1997), who traded in his hockey stick for a baseball bat. Yes, today's subject is Larry Walker.

Larry signed with the Montréal Expos in 1984 and made his debut with the big club late in the 1989 season. In his first full year in the bigs, he hit 19 home runs, and drove in 51 runs batted in. Good enough for seventh in the NL Rookie of the Year. From there, he became one of the keys to the Expos success in the early 1990's, leading the team to a 74-40 record, a first place finish in the NL East, all this before the strike that shut down baseball and cancelled the World Series. That 1994 Expos team became one of baseball's greatest "What If's?" because who knows, maybe the Expos would still be in Montréal if it weren't for the strike. Regardless, in his six years with les Expos, Walker had a decent .281 batting average, to go with 99 homers and 384 rbi's. But his best was yet to come.

At the end of the 1994 season, Walker signed with the Colorado Rockies. And in the crisp Rocky Mountain air, Walker became an offensive powerhouse. In his decade of service with the Rockies, he led the majors three times in batting average, hitting well over .300 in seven of those seasons. He made it to four All-Star teams, and was in the running for the MVP award six times. In 1997, he hit career highs in home runs with 49 (this led the NL), drove home 130 RBI's, and had a batting average of .366, and on base, and slugging percentages of .452, and .720 respectively (giving him an OPS of 1.172). Those numbers, awarded Walker the NL MVP award in 1997.

Wanting to be play for a contender in 2004, Walker was traded to the St. Louis Cardinals and even though the Redbirds lost the World Series that year, Walker still performed well, hitting .357 in four games, along with two home runs and five runs driven in. After the 2005 campaign, Walker, a veteran of 17 major league seasons, finally called it a career. His final numbers are worth of Hall of Fame consideration, with a final .313 average, not to mention 383 home runs, 1,311 runs batted in, 230 stolen bases, and an OPS of .965.

Currently, Walker helps the Cardinals out during spring training. Although he was offered a full-time position on the coaching staff, Walker decided it was best to be at home and spend time with his family.

Now, back to that "three" obsession. A couple of things I didn't mention earlier was that during his days with the Expos, Walker would buy tickets for 33 disadvantaged kids when he played in Montreal, to be seated in Section 333 at Olympic Stadium. And the final contract he signed with the Rockies called for a joint donation of $3,333,333 to children's organizations in both Colorado and his native British Columbia. 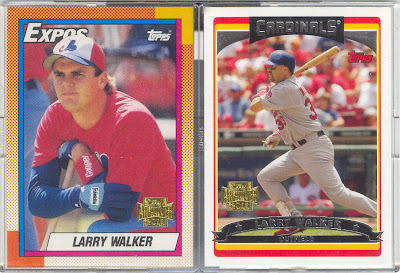 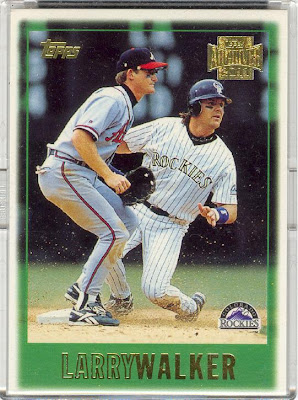