(It is the hope of this humble little blog that we run this feature on a regular and more consistent basis on Fridays at 9:00 A.M. CST or so help me...jba)

It was disappointing not to see baseball being played at the 2008 Summer Olympics in Beijing. It's sad that even if Chicago gets the bid for the 2016 games that baseball may not even be on the schedule (I blame it on the trampoline and contact bridge athletes, but that's just me). But did you know that at the 1984 Olympics in Los Angeles and the 1988 Olympics in Seoul that baseball was an exhibition sport?

Back then, Topps had the rights to produce cards of the players who represented the USA Baseball Team. The 1985 Topps set featured Coach Rod Dedeaux and the "1984 United States Baseball Team" led by soon-to-be-major-leaguers Mark McGwire, Cory Snyder, Bill Swift, Shane Mack, etc. The 1988 Topps Traded set honored the Gold Medal winning Team USA. Even Coach Mark Marquess couldn't have possibly envisioned that so many players that fought for gold in South Korea would have had successful careers in the big leagues. All-stars Andy Benes, Tino Martinez, Mickey Morandini, Charles Nagy, Robin Ventura were on this team, so were players the likes of Bret Barberie, Jeff Branson, Ed Sprague, and Ted Wood.

But we're not talking about any of those guys. Today's featured player, and one who will be subsequently added to the 2011 Topps Archives Project, was the ace of that medal-winning pitching staff. A man who pitched in two games at Seoul, striking out seven of Canada's finest in a three-inning stint; and then four days later pitched a complete game victory against the mighty Japanese team. In three seasons at the University of Michigan (thanks to Grand Cards for the correction), he compiled a 26-8 record, striking 186 and posting an ERA of 3.03, earning him a spot on both the Big 10 All-Tournament and All-Conference First Teams, as well as the Big-10 Player of the Year honor in 1988. He won the Golden Spikes Award in 1987 (nation's top amateur baseball player), and then the Sullivan Award in 1988 (nation's top amateur athlete...in ANY SPORT). All this, before being drafted in the first round, eighth overall, by the California Angels. Today, we honor Flint, Michigan's own...Jim Abbott!!!

Jim Abbott made the 1989 California Angels roster out of spring training without having to play in the minor leagues. In his rookie year, he started 29 games, completing 4 of them, two of them shutouts. His rookie W-L record was a respectable 12-12, striking out 115 hitters, and an ERA of 3.92. While he didn't win the AL Rookie of the Year award, he did earn a spot as the LHP on Topps 1989 All-Star Rookie team. His best year was in 1991, which saw him win 18 games (against 11 losses) in 34 starts, five of them being complete games, with a dazzling ERA of 2.89 and 158 K's. At the end of the 1992 season, he was traded to the New York Yankees.

With the Bronx Bombers in 1993, he went 11-14 and his ERA ballooned to 4.37. But the highlight of the year came on September 4, 1993, when he pitched a no-hitter against the Cleveland Indians in a 4-0 Yankees win. After two seasons in the Bronx, he signed on with the Chicago White Sox, only to be traded BACK to the California Angels in a pennant-drive deadline deal. He struggled in 1996, losing a league leading 18 games with the Angels. At that point, he decided to retire. But in 1998, he staged a comeback, first with the Chicago White Sox, and then in 1999 with the Milwaukee Brewers, who were now in the National League...meaning that Abbott would have to step up to the plate and bat for the very first time (for the record, he went 2-21 at the plate, both hits against the Cubs...)

For those who weren't following baseball at this time, you're probably wondering why I even wrote the words "meaning that Abbott would have to step up to the plate and bat for the very first time..." It's because after all of this, I forgot to mention something sort of important regarding Mr. Abbott. He earned all of his awards, played all of his games, pitched his no-hitter, did all of this despite the fact that he was born without a right hand.

Mariano Rivera once said that he "recalled Abbott taking batting practice for the Yankees, swatting home runs into the bleachers." (thanks to Tyler Kepner, New York Times, Talkin’ Baseball With the Yankees, June 6, 2007). So apparently, hitting was not an issue (if you've ever seen his...it pains me to even say it...1991 Upper Deck card..., you can see him batting).

About the fielding, according to Jim Abbott's official website:

"Abbott wore a right-hander's fielder's glove at the end of his right arm. While completing his follow-through after delivering a pitch, he rapidly switched the glove to his left hand so he could handle any balls hit back to him."

If you've never seen the above in action, how he did this looked so fluid, you wouldn't even know that he only had one hand. It was incredible, and many in baseball said that he was an excellent fielder.

He retired in 1999, and is now a motivational speaker. He was inducted into both the Michigan Sports Hall of Fame (2004) and the College Baseball Hall of Fame (2007). According to his website, Jim "also works with The Department of Labor’s Office of Disability Employment Policy (ODEP) on several initiatives encouraging businesses to hire people with disabilities."

Now, on to the business of showing off his 2011 Topps Archives cards.

His first Topps card came as a member of Team USA in the 1988 Topps Traded set. However, I don't think we can use this as the rights to Team USA belong to...Upper Deck. His rookie card appears in the 1989 Topps set as a first round draft pick from the...University of Michigan (that right Grand Cards???). However, as we all know, UD now has the exclusive license to all college sports thanks to its deal with the College Licensing Company. As he is wearing his Michigan uniform, we can't use that either. So, we are now left with probably a better option with our first card. Since he made it straight to the majors without minor league seasoning, we are going to use his 1989 Topps Traded card as an official member of the Angels: 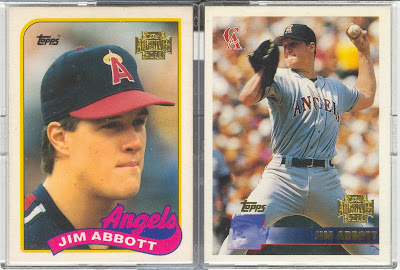 Right-oh! Jim Abbott was one of a kind, and he was an absolute pleasure to watch. A perfect inclusion to this set (good call and having to use his traded card, although I would have loved to see him again in his old UofM uniform). Oh well.

Great post ! Abbott is certainly an inspiration to many and your blog captured that perfectly.

I'm a huge Abbott fan, good player to add. I would have included one Angels's and one Yankees or USA card though.

I also believe you should include Paul O'Neill in the 2011 Archives set as well.

Wha... huh? Baseball was played at the 2008 Olympics. 2012 will be the first year without beisbol. http://en.wikipedia.org/wiki/Baseball_at_the_2008_Summer_Olympics