It's MLB's Opening Day (or Was that Yesterday)!!! 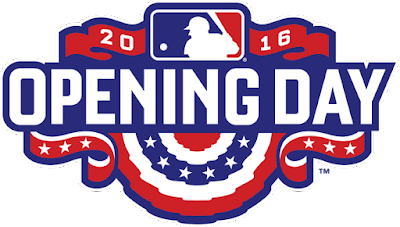 Work keeps me busy and away from this humble, little blog. I do have drafts of articles I want to post on here, but then a project comes up, so reality comes first and the blog goes back to the back burner.

But that's last month. Spring Training is now over. Yesterday, six teams started their 162-game quest to reach the postseason. Today, eighteen teams do the same (two games have already been postponed thanks to the snowstorms in the east coast).

Hobby wise, I've been keeping track of the comings and goings. I joined Topps Bunt this year and have a decent amount of cards so far. I'm having fun with it and as crazy as it sounds, I'm going to try for a complete "virtual" set of 2016 cards. I've also joined the contests...okay one anyway. Thanks to my 9-card lineup, I have a grand total of 840 on the scoreboard (heavy on Cardinals...they lost, right?). Should have picked Liriano as one of my cards instead of Wainwright. Trying again today, so wish me luck.

Regarding MLB Debuts in 2016, on Opening Day, two players took the field for the first time in a MLB uniform:

Jeremy Hazelbaker, an outfielder who joined the Cardinals after a seven-season career in the minor leagues (with Boston, Los Angeles, and St. Louis). He was added to the Cardinals' roster after Ruben Tejeda was placed on the DL. He appeared in the seventh inning, leading off as a pinch hitter for Adam Wainwright, striking out in five pitches against the Pirates' star reliever Tony Watson.

With Wainwright now out of the game, the Cardinals sent Seung-hwan Oh, an eleven-year veteran of the Korean and Japanese baseball leagues, to pitch the bottom of the seventh. He faced five batters, walking Matt Joyce, inducing John Jaso to ground out 4-3, walked Andrew McCutchen, and struck out David Freese (looking) and Starling Marte (swinging).

Hazelbaker does not have any Topps produced MiLB cards. His only cardboard appearances were back in 2009, with autographed cards in the 2009 Donruss Elite Extra Edition set. He also appears in the 2009 TRISTAR Prospects Plus set.

Oh signed with the Cardinals as a free agent in January. He already had a storied career in both Korea (seven-time All-Star, Rookie of the Year 2005, five-time KBO Relief Man Award) and Japan (All-Star 2015, CLCS MVP 2014), In eleven seasons in both leagues, he has recorded 357 saves, a 1.81 ERA, and 10.7 strikeouts per nine innings in 646.1 IP. He was also on the 2006 Korean Team for the World Baseball Classic. He has no baseball cards in the US.

It's going to be a great year for baseball in Chicago. There are extremely high expectations on both sides of town. Should be a lot of fun.

JayBee Anama
Posted by James B. Anama at 2:24 PM 5 comments: