Short Printed 2010 Topps Cards are Starting to Pop Up on the Bay...And in Other Places!!! 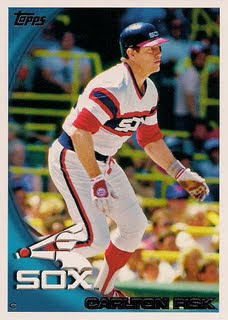 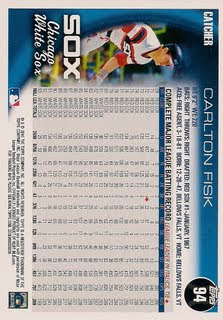 It's not our imagination folks. Yes, there are short prints in 2010 Topps Series 1. And contrary to some people (okay, one person…) screaming to the high heavens that Topps is gimmicking up now that they have the exclusive license, I don't see a problem with SP's. It's just another challenge and a cool surprise for kids who open a pack of cards. It isn't as if, as one of his commenters posted, that it's super SP'd, or that they photoshopped the president (although I wouldn't be surprised if somehow he showed up again this year) into the stands with the ghost of one of their CMG exclusives in the dugout.

But somewhere along the line, one has to ask, "When will this all end???" They can't possibly continue this into 2011…could they? Now that Topps has the exclusive, couldn't MLB Properties allow them to create a set akin to 2003-2005 Topps Retired and create an all-legends set with the brand new modern day design??? That's probably a better idea.

Well, this means that we can look forward to more SP'd legends in Series 2 and U & H. In any event, I want to thank the man at Stale Gum for allowing me to swipe this scan of Carlton Fisk's SP card. Okay, he didn't actually let me, I went ahead and did it myself. So far, it has been confirmed that Roger Maris, Robin Yount, and now Carlton Fisk have SP's. I'll be scouring the Bay tonight to see if any more came down the pipe.

And I don't even have series 2 nor U & H SP's completed from last year. Oh well, then the want lists grow larger.

And don't be surprised if they pull off doing SP'd minor league cards of current players in their Topps Pro Debut set (high speculation…just saying).

JayBee Anama
Posted by James B. Anama at 2:38 PM

I personally loved the SP's from 2009 and look forward to see who all is in them in 2010! I know they can frustrate serious collectors that try to complete master sets. But, for someone like me who just collects some individual players, they're awesome!

By the way, I loved the old Sox logo on the Fisk and the old Brewers logo on the Yount, could that be a reason for the SP's as well?

I like them too. The old school logo is fantastic.

I think the SP's are awesome. It's one of the reasons I even buy packs, otherwise I could just wait and get the whole set. We all know that's no fun.

A new Fisk to chase! Awesome!

I agree love that new Fisk card and it's a White Sox card...and not The Carmines of Boston!!

It is collectable and old fashion fun.

I knew Steve would get a kick out of this one! LOL. I'm going to buy a few packs, but as always I'm going to be focusing on the Reds.

That idea about the retired legends set is great, but doesn't the MLBPA prohibit producing an all-retired set? Card makers can only put so many retired veterans in any set and they have to cram a bunch of rookies into everything.
Utterly ridiculous, but I think those are the rules...