He defined the role of designated hitter in the American League in the 80's and 90's. He was a hitter that knew what was necessary to succeed in every at-bat. He was also one of the few players in big league history to have his number retired by one team while still active with another. He was one of the classiest players on and off the field. And this past Saturday, the Baltimore Orioles thanked him for his seven years of service by inducting him to their Hall of Fame. A native Marylander, and by all accounts, an all around good guy, there is no doubt that he should be added to the 2011 Topps Archives project. He is Harold Baines.

Baines played 22 seasons in the big leagues, all in the American League. He started his career as an outfielder for the Chicago White Sox, and after seven productive seasons manning Comiskey Parks right field, he became their designated hitter. After being traded to the Texas Rangers (a trade that would introduce a young Sammy Sosa to Chicago), the White Sox retired his #3, becoming the third player to have this honor while still an active player (Frank Robinson and Phil Niekro, both Hall of Famers are the other two).

He was then traded to Oakland, helping the Athletics get to the World Series in 1990. In 1993, he began his first stint with the Orioles. In 1996, he came back to the White Sox (who let him wear his #3 jersey), only to go back to the Orioles a season and a half later. He was traded to the Indians during the 1999 season, only to return to the O's to begin the next. On July 29, 2000, he was traded back to the White Sox to finish his career. He is now the Pale Hoses' first base coach.

After 22 seasons, Baines ended his career with a .289 lifetime batting average, 384 home runs, 1628 runs batted in, stole 34 bases, and an OPS of .820. He was a six-time all-star, won the Silver Slugger award in 1989 as the AL's best DH, and was in the running for the MVP four times during the "Winning Ugly" era in the early 80's. With numbers like these, along with being honored by O's over the weekend, we tip our collective caps and add Harold Baines to the 2011 Topps Archives Project. 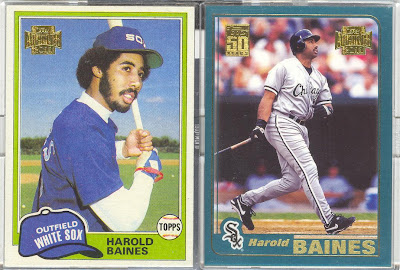