I have finally finished simulating the All-Star Games using my 1995 End of Year All-Star Teams. And for the fifth straight season, the 1995 American League All-Stars wins the seven game series 4-3 over the 1995 National League All-Stars. But somehow, in the one game where it matters most, the National League pulls out the victory. This is the third year in four that the NL loses the series but wins the All-Star Game.

So once again, the AL wins the seven game series 4-3. But the NL wins the ever important "anything goes" series. This seventh series seems to be a good indicator as to who wins the big one.

For the official All-Star Game, I decided to just simulate one game and one game only. The starting pitchers were Johnson and Maddux and I let them pitch two innings (unless they struggled badly). The rest of the pitchers would get one inning each (unless they struggled badly). The position players were replaced every three innings. No pinch hitters here, (as in previous tries, the pinch hitter is taken out of the game), and there was only one double switch.

The starting lineups, first for the American League (I'm using 1996 Topps cards because these are the cards I used to imagine my All-Star teams): 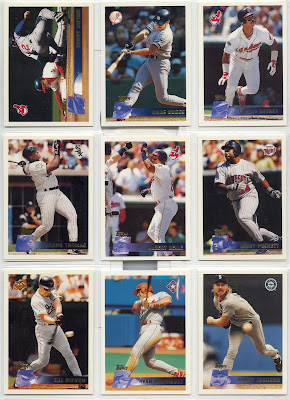 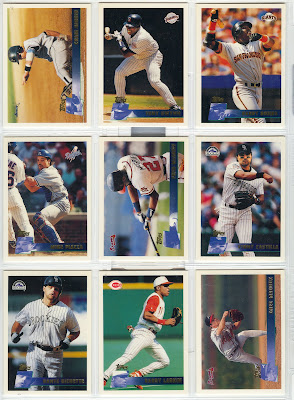 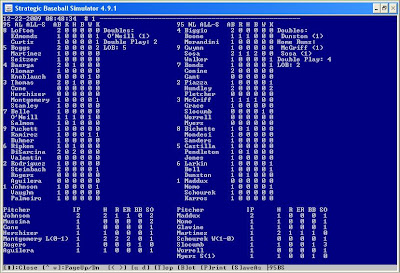 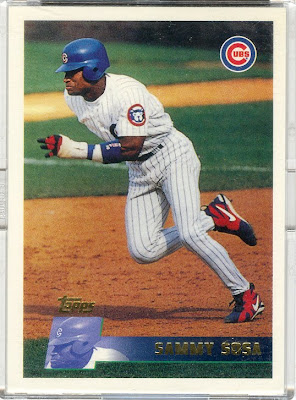 The MVP for the 1995 All-Star Game is Sammy Sosa.
If this game actually existed, the MVP would have been Sammy Sosa (1-2, HR, 2 RBI's). At this time, Sosa was more the 30-30 speed demon than the "Slammin' Sammy" we all knew in the late 90's - early 2000's. Pete Schourek gets the win, Jeff Montgomery takes the loss, Randy Myers earns the well deserved save, and the only players who didn't get in the game were pitchers Jose Mesa, Lee Smith, and Tim Wakefield from the AL and Tom Henke and Jaime Navarro from the NL. 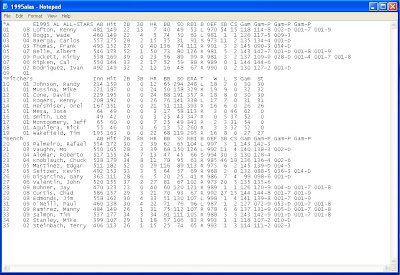 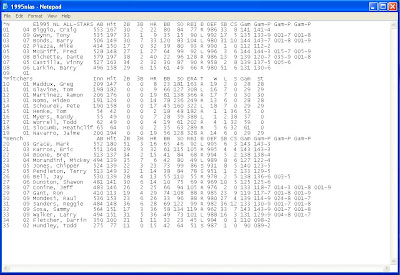 Now that the 1995 All-Star Games are officially over, on Wednesday, I will introduce the 1996 End of Year All-Star teams. Simulations for games with those rosters to come by Sunday night for a Monday morning recap.

Who is this guy Maurice and why is he leaving this (Same) message on all the Sports Cards Blogs.

I really like the 1996 set. Great pictures, clean card design, it's one of the better issue for Topps in the past 20 years in my opinion. Plus this set propelled me back into the Hobby with the Mantle reprints!