Friend of the blog The Drizz added an eBay auction link to the comments section of one of my posts, and it looks like he has found a Curtis Granderson card #222 in a Yankees uniform. Which might not necessarily be a big deal. I mean if they can get Akinori Iwamura in a Pirates uniform (he played for the Rays last year), then why not Granderson in a Yankee uni? 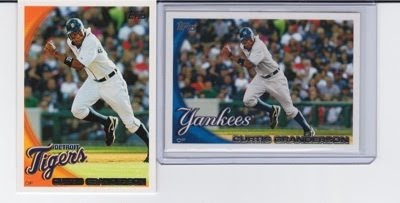 Nice huh? Not only did they photoshop the Yankees uni onto Granderson's body, they used the same picture (although the Yankee's card is horizontal, and you can see more of the picture than on the Tiger's card). Now this is more akin to the CC card I was talking about in the Teixeira post.

Somewhere, Detroit fans (and the guy at Grand Cards) are weeping.

Seems funny how often it's the Yankees that get the weird shortprints.

much to my surprise... following ths sp thing has been the highlight of my weekend.

i bought 5 packs today. no sp's. tomorrow, we try again!

being a yankee topps team collector this year is getting expensive! they want over a hundred bucks on the 'bay for the curtis and the tex, no to mention the lou and the babe...

There is also Rickey Henderson SP on eBay. That brings it up to 17.

did you see this?

I'm actually glad that they created a SP of Granderson in a Yankees uniform, because at least now I can get one last Granderson card in a Tigers uniform with all of his stats with Detroit.