Can't believe I'm wide awake for this right now. It's something I've thought about writing on this humble little blog, and is always something I've wanted to do since I bought my 1986 Topps set about 12 years ago or so.

Starting in 1986, Topps included a little subset called Turn Back the Clock amongst the 792 cards in their eponymous set. Now while this was not their first attempt at this (there had been a Turn Back the Clock subset in 1977...thanks to night owl for the correction), this was the first year that they included actual Topps cards to depict the year being discussed. The cards went spaced out in five year increments, so you had a card for Five Years Ago to Twenty-Five Years Ago. In 1986, that meant the focus was on the years 1981, 1976, 1971, 1966, and 1961. The fronts of each card had a picture of what that year's Topps cards looked like, and the backs of each card had a "Year in Review" in which the highlights for that particular year was discussed. The last highlight always had something to do with the player depicted on the front of the card. For example, Fernando Valenzuela's 1981 Topps card was featured on the front of the first 1986 TBC card #401, and the last highlight on the back of the card reads:

...but the major story in 1981 was written by Fernando Valenzuela whose 8 Shutouts earned him both NL's Rookie of the Year adn Cy Young Awards.
The other subjects that year were Tom Seaver (1976), Willie Mays (1971), Frank Robinson (1966), and Roger Maris (1961). Each player chosen was the "major story" of that particular year (each subject was introduced with the same words "...but the major story in...")

The following year, the Turn Back the Clock subset made it's heralded return, this time featuring the Topps cards of Rickey Henderson (1982), Reggie Jackson (1977), Roberto Clemente (1972), Carl Yastrzemski (1987), and Maury Wills (1962). And again each card had the highlights of that particular year and of course the "major story" was the player depicted in front of the card. Now all would be fine and the subset would have probably been an afterthought if not for the fact that Maury Wills did NOT have a Topps card in 1962. His first official base card was in 1967 Topps. So where did this card come from??? As with the 1975 MVP subset, they had to create a card of Wills just for the subset. How's that for tricking the collector. Can you imagine people who owned the 1962 set going, "Wait...I don't remember seeing thes card before? Do I have one???"

In 1988, the third year of the TBC subsets. Not knowing back when I started collecting that Topps had done this previously, I thought it was neat to see what cards from the years depicted looked like. The subjects featured that year were Nolan Ryan (1983), Jim Rice (1978), Ron Blomberg (1973), Bob Gibson (1968), and Stan Musial (1963), and highlights of that particular year was written on the backs of each card?

The final time this subset was included in the big 792 card set was in 1990. I did again take all my subset cards and put them together to make a bigger timeline (three years in a row). While it was nice, I knew then that something was missing. It didn't take long to notice that Topps had done these the years before (1986-1987), and I was eventually determined to get all the cards together. The final five subjects for this five year, twenty-five card subset, were Dick Howser (1985), Mike Schmidt (1980), Fred Lynn (1975), Johnny Bench (1970), and Sandy Koufax (1965).

I bought the 1986-1987 Topps sets when I was much older, and although I said I wanted to put all twenty-five cards together to see what the full time line looked like, I never got around to do it. The cards were put away, never to be seen unless I take them out of their binders. Well, that ends tonight folks. 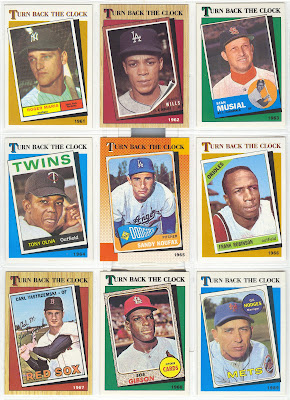 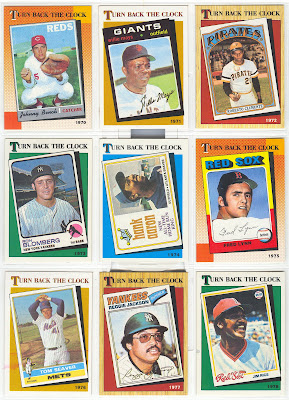 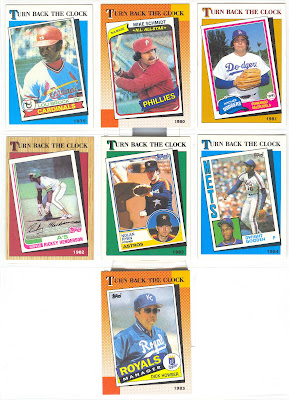 Not only did this subset give me (and most collectors) a crash course in baseball card history, but also in baseball history. It took a 25 year segment of baseball lore and condensed it into a way that kids could learn about the key events, people, and even what the cards looked like. It also gave older collectors a chance to look back and remember the events of their youth and the cards that captured those moments in time.

When the 2010 Topps baseball set comes out, it means that another 25 year period has ended (1986-2010). Will Topps bring back this subset for 2011-2015 Topps? Would they treat this as an insert set or a subset within the eponymous set? Can you imagine the events that have happened within the last 23 years alone? And who knows what could happen in the next two? How much information would they be able to squeeze onto a card? It would be nice to see this subset brought back to life in the near future. We'll just have to wait and see.

JayBee Anama
Posted by James B. Anama at 2:30 AM

Great post JayBee! I love these subsets! One of my favorite subsets growing up was the 1975 Topps MVP subset. Part of my collection is getting the reprints or actual Topps cards of the MVP's through the years.

The first Turn Back the Clock subset was in the 1977 Topps set.

that 62 wills card is one of my favorites, simply because it was created specially for the 75 set. topps has used it a few times since, i believe.
a 2010 tbtc set could include some cool stuff. i hope they bring it back.

I agree gcrl. I always liked the '62 Wills card as well for that same reason. I would love to get my hands on a "reprinted" copy of the card.

All courtsey of magazine Exhange webite!

I always enjoyed the TBtC cards. At the time it was the only way I could claim to own a Willy Mays card. I think bringing back this subset would be a great idea.

Thank you for the post! I actually have three '62 Maury Wills cards! I'm trying to get the whole set as well.