A few years ago, Brian, the owner of the card shop that I frequented (he closed at the end of 2005, sad day for me...but I digress) called me up and said that one of his other customers decided to give up his set of 1978 Topps cards, and he couldn't think of any other person to sell this to than to me. At the time, I had every Topps card going back to 1980, so after giving it some thought, I said I would take a look at the set.

He showed me the box, and in it were these rather simply designed looking cards. A rather large picture surrounded by a team-colored team name in cursive on the lower left corner, the name on the player on the bottom right, the position of the player in a baseball either on the left or right top corners, and that's it. It was about as plain a design as it could get. And remembering that earlier in the decade, Topps came out with cards that had grey borders (1970), black borders (1971), psychadelic team names (1972), mismatched colored borders (1975), and multi-color boxes (1976), this was about as simple as it gets. I think I paid about 40-50 bucks for the set, which was fair considering the condition, and the fact that after sorting the cards, I was four cards short!!!

This was the first year that Topps increased the number of cards from 660 to 726, which meant that for the next four years, there would be at least 66 cards that would be double printed (at the time, a full sheet of cards would have 132 cards, or 11 cards across x 12 cards down). Among the famous double printed cards were Pete Rose, Tony Perez, Ron Guidry, Earl Weaver, and the Montréal Expos team card.

This was the year that the Yankees won their second straight World Series of the decade, and Ron Guidry struck out 18 players. Pete Rose was climbing up the all-time leader boards, while Nolan Ryan was inching closer to all-time strikeout crown. Hall of Famers Eddie Murray and Paul Molitor were just starting their careers, while Lou Brock and Willie McCovey were preparing to wind down their historic careers. A good mix of hall-of-fame veterans and rookies abound in this set. 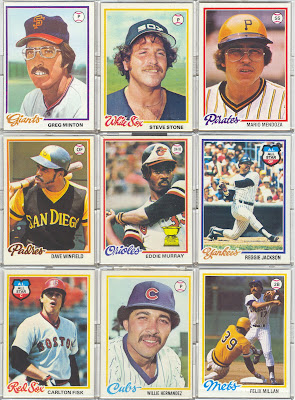 It's been thirty years since this set came out, and comparing them to the 2008 cards, you have to at least admit that the photography at least has improved incredibly. The 1978 Topps set is full of just ugly cards. Truly no offense to the players, but just some of the head-shots used for this set leave a lot to be desired. To wit, check out the glasses and teeth on a young Greg Minton (#312 if you're looking for it), or the curly hair (on his chest) and double necklaces on Steve Stone (#153). And was the sun shining brightly when the Topps photographer snapped the picture that eventually wound up on Mario Mendoza's card (#383)???

I have to admit, the action shots are nice, for 1978 standards (and I mean that in the nicest way possible). Check out Reggie Jackson's swing (#200), or Felix Millan of the Mets turning a double play and avoiding a runner at the same time (#505). You'd think the camera was right in the middle of the infield.

The backs of the cards were in orange, with blue text that was easy to read. Each card (of the players anyway) had a game on the right side called "Play Ball." Meant to be played by two people, the idea was that you'd select some cards, and then flip them over and the play on that card will determine what happens on the field (single, ground out, strikeout). I guess you'd have to use markers to determine baserunners and follow along with the action that way. I'm sure many kids stacked the deck with really good cards so that they could just continually hit without getting an out. I'm sure that the rules were to shuffle the cards prior to playing (the rules appeared on some of the cards).

There were manager cards, with younger pictures of each skipper on the left of his current picture. Cards of all 26 teams featured checklists of the players on each team (and the Cubs had their traditional team headshot photo). Four-player rookie cards are found at the end of the set, including the Paul Molitor/Alan Trammell shortstops card. League leaders, Playoff Highlights, and Record breakers are part of the set and are found grouped together within the set.

The design may be plain, and the pictures could have been better, but still, the 1978 Topps set was a nice change of pace from all the bizarre designs they came out with earlier in the decade. Sets can be bought for reasonable prices depending on the condition of the cards online and at shows. Some of the names don't register for me (again, I was only two when this set went live), but still, just like the yearbook, it brings up quie a lot of memories for those who were around that time. And for as bland as the set design is, it still is a decent looking set. A toast to the 1978 Topps set. Happy 30th.

JayBee, I love the website and I check it every day and my favorite feature is the set of the week.

This set along with 1977 are my two favorite sets that Topps has produced.

Five things I love about this set:

3)The All Star badge that was awarded to the all star players.

4)Color...I love the way the colors of the team name and the border play off each other.

6)A great mix of action photography and candid photos.(Virtually every current Topps/UD card is of a pitcher pitching, a batter batting, or a fielder fielding. Check out the 2008 Yankees team set and look at how similar they all are.)

I do disagree with you about the description of the set as being "plain" or "bland." I loved the simple and elegant design of these cards.

I do agree with you that this set contains a few ugly cards and you picked the perfect card to illustrate this. The 1978 Greg Minton card might be the ugliest card I have ever seen. Mike Paxton's 78card runs a distant second.

Love the review and I look forward to next week's set.

Great work like always JayBee. I don't know if you saw, but I actually opened a pack of '78 Topps and posted it on my blog recently. Enjoy.

1978 was a good combination of how to do cards right (large photo, easy to read back)... and how to do them wrong (god awful air-brushing, double prints). Still 78 is my favorite set from the later 70s.

This was the first year that I collected cards. I was nine. I know they look lousy, but the sentimental value makes them one of my favorite sets ever. I have a friend who loves 1990 Topps, and once he explained that his reason for loving them was the same reason as mine for loving these, I had to cut him slack.