Long Overdue Thanks to a Couple of Friends of the Blog!

Two packages came in the mail a while back from two friends of the blog. And because of my "computer issues," I haven't had a chance to thank them...until now.

Friend of the blog, all around good guy, the guy that gave us the scoop on the 2010 Topps SP's, tdlindgren sent an SP card from 2009 Topps U & H. Up to this point, I only have six of the twenty-five cards. A long way to go before even considering this set complete. But an e-mail from him appeared in my inbox, stating, " I have an SP from 2009 Topps Updates and Highlights that I'm going to send to you." 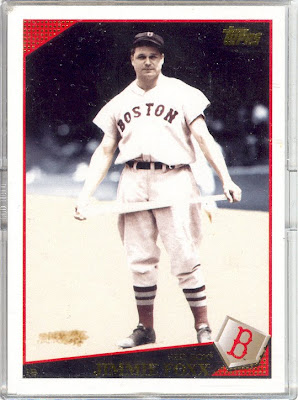 2009 Topps U & H Jimmie Foxx #UH281.
I sent an e-mail to Tim stating that if I did ever get an SP card, even if I didn't already have it, it was his. And sure enough, I did get one (Babe Ruth). Also, I know you commented that you were looking for the Blue Back #15 (which also happens to be of the Babe). That was the one card that I got from my WalMart experiment. Tim, if you're still looking for those cards, please let me know.

Also, another friend of the blog daverysr58A, had a couple of SP's from U & H that I was looking for, and although he didn't update his wantlist, he did say that he would send a couple of SP's in exchange for some 2010 Topps cards. I received the cards: 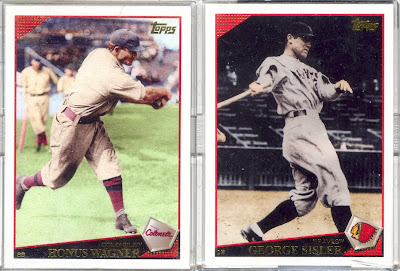 2009 Topps U & H Honus Wagner #UH98. 2009 Topps U & H George Sisler #153.
I sent Don a few cards from his 2010 Topps Series 1 want list and a few inserts. But now I think I may have shorted the man. Don, when you get the package, and think there isn't enough, please go through the cards I have available and let me know if there is anything else you'd like, and it's yours.

So gentlemen, thank you very much for the cards. It brings my wantlist for the U & H SP's down to 16 cards. Still a long way to go, but I'm getting there. Thanks again guys. Your generosity knows no bounds (and I have a long way to go before mine is as high as yours).

Email ThisBlogThis!Share to TwitterShare to FacebookShare to Pinterest
Labels: 2009, thank you, topps, U and H shortprints