I have finally finished simulating the All-Star Games using my 2000 End of Year All-Star Teams. For those wondering why it's taken so long to get this post up...let's just say my computer has been down, and scanning the cards and actual game information has been impossible. The computer is now fixed, and I'm ready to go. Fortunately, my "Random Topps Card of the Day" posts are set up ahead of time, so you the readers haven't had to miss a day. Well, until this afternoon anyway. But enough of that.

Anyway, after the 1999 blowout by the National League, the 2000 American League All-Star Team pulls through with another 4-3 series win over their 2000 NL rivals. Does this mean they'll break through and win the ASG? Stay tuned.

The American League wins the series, and the ever important "anything goes" series. And the AL is now 8-6 in the seven game series. But the NL presently have a 8-5 lead in the one-game ASG. This seventh series seems to be a good indicator as to who wins the big one. Does this mean good luck for the junior circuit?

For the official All-Star Game, I decided to just simulate one game and one game only. The starting pitchers were Glavine and Clemens and I let them pitch two innings (unless they struggled badly). The rest of the pitchers would get one inning each (unless they struggled badly). The position players were replaced every three innings. No pinch hitters here, (as in previous tries, the pinch hitter is taken out of the game). The DH's (Mark McGwire of the NL and Frank Thomas of the AL) were never replaced.

The starting lineups, first for the National League (I'm using 2001 Topps cards because these are the cards I used to represent the players on my All-Star teams): 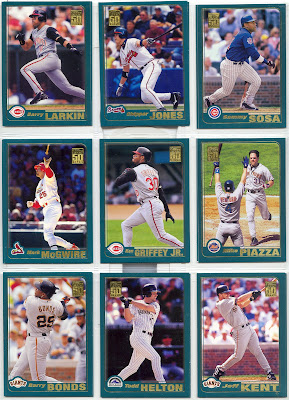 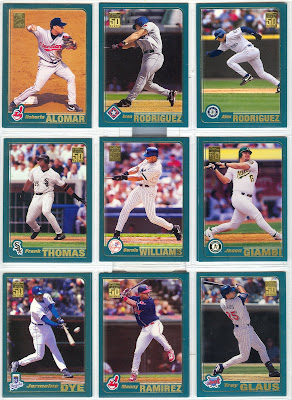 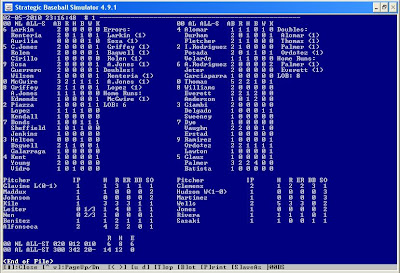 Your starters, Tom Glavine and Roger Clemens. Dean Palmer is the MVP.
So the AL finally beats up on their NL rivals, not only using the home run to their advantage, but thanks to poor defense by usually surehanded fielders. If this game actually existed, the MVP award would have gone to Dean Palmer (2-3, 1 hr, 4 rbi). Tim Hudson takes the win (although it should have gone to Clemens), Tom Glavine gets the loss, and the only players who didn't get in the game were pitchers Mike Hampton & Trevor Hoffman from the NL and Bartolo Colon, Derek Lowe, & Mike Mussina from the AL. 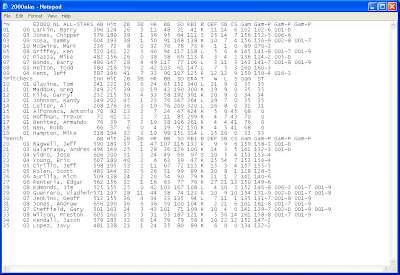 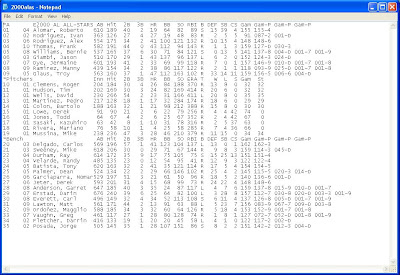 Now that the 2000 All-Star Games are officially over, at 9:00 AM CST on Wednesday, I will introduce the 2001 End of Year All-Star teams. Simulations for games with those rosters to come hopefully by Sunday night.