Many Thanks to Those Who've Filled My Mailbox with Cards!!!

Last week, I mailed out a bunch of envelopes. These last couple of weeks, I've been getting mail. All envelopes had, whether I mailed them, or they showed up at my door, contained cards. And in some cases, not necessarily baseball cards (and in a couple of cases, not even Topps cards!!!). I'll explain in a minute.

The wantlist on the sidebar will be shrinking a bit thanks to the following people who so kindly traded cards or just sent me stuff out of the kindness of their hearts (or in one case, I won a contest...I know...I'll explain in a minute).

First, thanks to friend of the blog Don Sherman. Don, as you recall, won my 2009 All-Star Rookie Team contest. A while back, he e-mailed me saying that he bought himself a 2009 Topps Holiday factory set, complete with the ten bonus rookie cards inside. He asked if I wanted them. No would have been the wrong answer. So he sent me a list of cards he needed from 1997 and 1998 Topps to exchange for them. And, after digging through all my boxes (and getting them organized by year...finally), I found a ton of cards he needed to whittle down his wantlists. So a package of 1997 and 1998 Topps, along with the pack of jumbo 2009 Topps U & H made it's way to Don. And in return, this package came in from Arkansas, containing: 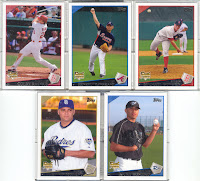 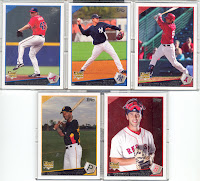 Second, new friend of the blog Matthew Edwards (I gave up Facebook for Lent, Matt, so please don't be upset with me for not hitting the "accept friend" thing yet...I'll be back in April), e-mailed me asking how it was possible for me to know down to the single card how many I have in my collection. It's easy...I collect complete sets, so I just add up the totals of how many cards come in a set and there you go. The challenge is keeping tabs of the singles I have for sets I haven't completed yet (like all the cards in my want list). Anyway, he said he that he had some cards for me and because they weren't much, he wasn't going to even bother sending me a list for a trade. Well, the cards came on Saturday...

Third, Richard Cavallaro (aka rcav220 on the Topps Message Boards) has a lot of cards on his 2010 want list. For eight cards that he needed, I received:

Next, friend of the blog the drizz saw that I had a 2010 Topps Gold Brandon Inge card in my trade list, and promptly asked for it. The card was mailed late last week, and last night a package from Michigan arrived with these: 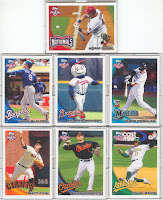 And last but not least, Brian Karcher e-mailed out of the blue saying that he had an Alfonso Soriano CYMTO Original back that he'd be willing to trade for the Pujols gold. After agreeing, he also said that he was also interested in a few random Brewers inserts I had as well. That's fine. So, for four cards sent to Milwaukee, this one came to me:

That takes care of the trades and thank yous. Now onto the contest winnings.

What? He won a contest?

The Voice of the Collector (the Anti-Beckett) blog ran a contest asking to identify a character.

So as a prize, this came in the mail on Monday... 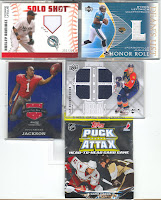 Yes, there are UD cards amongst the prizes. But, more importantly, there were two packs of Topps Puck Attax (yeah, I know I showed only one here...)

The packs contained 12 round cards. How the heck am I supposed to store these??? The thing is that I wanted to wait until I got the cards before I let the public know how I knew the answer. Ironically, I was going over some old...wait for it...BECKETT BASEBALL magazines when I saw the picture of the subject of his contest. After going over the magazines, I went online, happened upon his contest, and wouldn't you know it was the same alien/monster/thingy that I had just looked at moments before. Needless to say, since he had just posted it, I answered quickly and won.

Regardless, to everyone who sent me cards. Thank you very much. Wow this was a long post.

Email ThisBlogThis!Share to TwitterShare to FacebookShare to Pinterest
Labels: 2010, thank you, topps

I'm glad I could help! Update those lists & I'll see if I have some more I can send you.

I'm going to have some want lists posted (& trade lists as well!) but I'll make you work for them if you insist on sending me something. :)