Okay, okay, I promised I'd try to do this at least once a month. However, I totally blew off January. So let me try this again. Lots of comments to go through. Here we go.

First off, I'm not a big fan of anonymous commenters. Why? Some spam stuff, some ask questions, some just want to rile me up. Whatever. I know the average person who stumbles onto this humble little blog stays on average for no more than two minutes. Before making a comment, make an effort to find an answer. If you can't, then ask me. To the anonymous commenter who asked me, "And just exactly what is the Topps Card Randomizer?" Well, if you scrolled down the sidebar, in the labels category, you'd see a label called Topps Card Randomizer. For those who don't want to click on the link, the TCR is a MS Excel spreadsheet that utilizes the Excel's VLOOKUP feature, and Random functions. 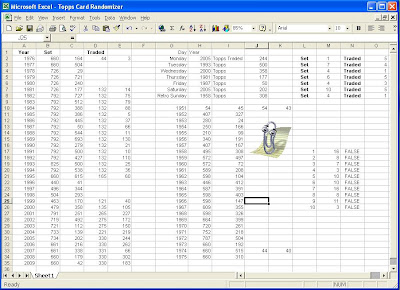 Columns A contains a list of years (from 1976 to 2009), column B the number of cards in a particular set. You will also notice that if a year also had a Traded or Updates set (1976, 1981-1995, 1998-2009), the number of cards within those sets appear as well in column D. Columns C and E contain formulas that will randomly select a number from 1 to the number that is in cell to its left. Holding the F9 key of the keyboard (or the delete key) will result in the numbers in both columns C and E to change very fast. I normally hold the key down for at least 30 seconds. Once the time is up, the cells will come up with a card number. In columns G-J, you will see a list of days (column G). Column H contains a formula that will randomly select a number from 1976 to 2009. Column I contains a formula that will either select the words "Topps" or "Topps Traded" (will explain that one shortly). Column J contains a VLOOKUP formula that will select the card number that was chosen next to that particular year. And this is what determines what cards I pick. Now, below, the days, you will see a list of years from 1951 to 1975. Using the same formulas in columns A-E, this is what I use to determine what card to feature for Retro Sunday. The Retro Sunday line picks a year from 1951-1975, and whatever card number is randomly chosen will be what is featured for that week. How does column I pick whether or not the set from a particular year should be the regular or Traded set? In columns L-O, you will see the words Set: (column L) and Traded: (column N) and a pair of numbers. Column M randomly picks a number from 1-10, and column O randomly picks a number from 1-5. Whatever number is higher will determine if the card from a particular year's set would be from the regular set or the Traded set. As you can see, I have it set so that it tries to pick a card from the regular set more often. This works well especially if the same year is chosen on two different days. The Retro Sunday line picks a number from 1-5 for a set and 1-3 for the Traded set. Now there really weren't any traded sets, this is used if I need to pick a card from 1951 (Red or Blue Backs) and 1974 (regular or traded). Otherwise, if another year shows up (let's say 1961), and the option is for traded, then a "0" will appear. And then I have to start over. This also happens if let's say the Randomizer comes up with 1977 Traded (which there is none), or 1997 Traded (no such thing). And that is where the last part comes into play. You will notice below the Set/Traded section a column of numbers from 1-10 (column L). Column M randomly chooses a number from 1-20, and column N will indicate True or False. If after 30 seconds, any one of the seven cards chosen comes up with a "0" or if there is an instance where the same year and set comes up twice (has happened), depending on what number the word "true" appears, I will press the F9 key that number of times. Until all ten lines comes up with the word "false", I will continue to press same number of times that the word "true" appears. If the seven cards selected are of different years or sets, and they have not yet been used, then those are the seven cards chosen for that particular week.

If you'd like a copy of the Topps Card Randomizer to use and analyze for yourself, please send me an e-mail at bdj610@hotmail.com and I'd be more than happy to forward it to you. (And then you can call me a big geek for even taking the time to make this).

To TJ: best answer ever (to the question of what is Abe Lincoln's favorite team).

To Paul, same topic. I've seen a scan of that Hornsby card. I don't think that's Lincoln in the back ground...unless there is a second card of Hornsby WITH Abe in the stands where the guy in the card is supposed to be...still haven't figured it out.

To Joe S, I'm not against the SP's. Heck, I'm trying to collect the darn things. I think the problem I have is that Topps is including cards that frankly don't mean much to anybody outside of Yankees fans, and I've decided I won't be collecting them. Of course, it doesn't mean that my set will never be complete, but I'm not going to be actively hunting them down the way I would be the legends SP's. Hey, if you do find one, let me know will you???

To another anonymous poster...I haven't seen it yet. But I'll take your word for it. Something has to give. If Topps is going to award guys who make their All-Star Rookie Team, make an effort and make sure that they get the silver cup added to their card!!! There are a lot of collectors out there who specifically get the cards with the cup on them. What do you guys do when Topps forgets to add the cup onto a player's card (or for that matter, add a cup to a player's card who shouldn't have gotten it)?

To the Champions Time Travel Baseball League, for all the simulations, I have decided to use the Strategic Baseball Simulator version 4.9.1. I received an e-mail from one of the contributors of the Strategic Baseball Simulator suggesting I use their product. It's worked rather well so far. And it's been easy to create teams. Now after I introduce all the teams (I have about seven more to go), I'm going to attempt to simulate a 162 game season using all 44 teams (22 years with two teams per year). I just need time to hash out the details and see if I can actually pull this off. I might even make this a contest. I have not yet decided about that yet.

To steveisjewish, I checked mine. Yes, it does have the same error yours does. Card #327 in the 2010 Topps set is of Albert Pujols as MVP, but the position on the back of the card shows Outfield, even though correctly lists him as a first baseman.

To Offy, not only was that commenter wise, but modest too!!!

So ends this edition of the Monthly Comment Mailbag. Keep those comments and questions coming!!! Thanks to all who participated.

Email ThisBlogThis!Share to TwitterShare to FacebookShare to Pinterest
Labels: commentary, responses to comments

Not trying to bust your chops or rile you, but are you kidding? Scroll down the sidebar? Your sidebar is 659 lines long, so instead of you just linking the text of the Topps Card Randomizer to whatever page it links to, you would have your readers scroll down trying to find something on a 650+ long sidebar? The sidebar is unfortunately too long to be useful.

Your comment box page says "if you must leave a comment anonymously, that's fine too." Then you toss a hissy fit when someone does. You already mentioned you wish people wouldn't, which falls under the category of nagging methinks. Just disable it if you don't want the input or the questions.

Nice blog posting and full of valid information and interesting too, thanks for sharing with us