What better way to resuscitate this long dormant feature of the blog (which I will try to put back on a weekly basis...) than to feature the newest members of baseball's Hall of Fame. And who better to lead it off than the greatest leadoff hitter of all time.

Rickey Henderson is the greatest of all time. Rickey Henderson would tell you that, and then Rickey Henderson would go onto the baseball field and prove it. Rickey redefined the role of the leadoff hitter. Not only was Rickey able to get on base (either by drawing a walk or getting a hit), and not only was he able to steal bases (will get to this later), but Rickey could change the course of the game in the game's first at bat by sending a pitch into the stands. And before many fans can settle into their seats to enjoy the game, their hometown heroes are already behind 1-0.

The lifetime numbers Rickey compiled in his long, four-decade career, are staggering. In 3,081 games and 13,346 lifetime plate appearances, Rickey:

Rickey Henderson also was a 10-time All-Star, a Gold Glove winning outfielder (in 1981), won the Silver Slugger three times, and the 1990 American League MVP. He is a member of two World Series winning teams (1989 Athletics, 1993 Blue Jays), and in 60 playoff games, hit four home runs and stole 33 bases, seven in the World Series. 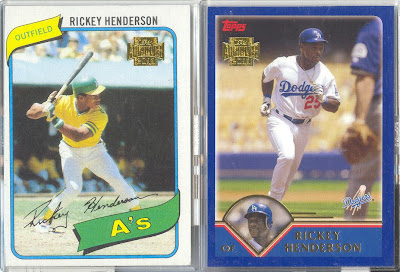 First card: 1980 Topps #482. Last card: 2003 Topps Traded #T73.
A total of 511 BBWAA voters agreed that Rickey Henderson was worthy of induction into the Hall of Fame. And he definitely is deserving of the honor. Congratulations to Rickey Henderson, 2009 Hall of Famer.