Inspired by the request of the Bay Rat North West, the next player chosen for the 2011 Topps Archives Project became the face of the Cincinnati Reds going into the 21st Century. Our subject, born and raised in the Queen City, had the privilege of playing for his hometown team for an amazing 19 years. He is a World Series Champion, playing shortstop for the 1990 Reds. He represented the team twelve times in the All-Star Game, and was named NL MVP in 1995. This man is none other than Barry Larkin.

While players like Eric Davis, Chris Sabo, "The Nasty Boys," and others got all the headlines, Barry Larkin was a key player for the 1990 Reds team that shocked the world by beating a powerful Oakland Athletics team in four games. In that series, he hit .353 (6 for 17), scored three times, and stole four bases.

As another player who spent his entire career with one team, he has a very good shot at Cooperstown when he is among the candidates for next year's HOF ballot. For this, and more, we are going to add this future Hall-of-Famer to the 2011 Topps Archives set. 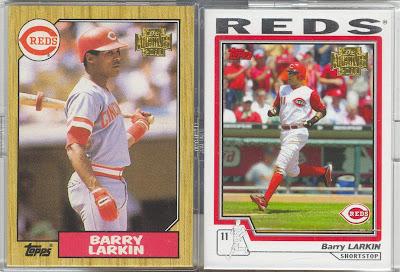 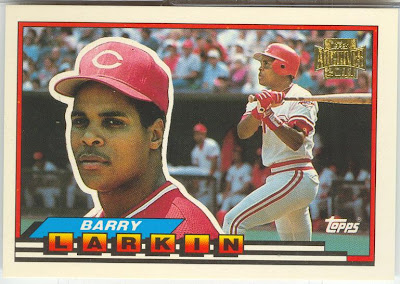 1989 Topps Big #199.
We need 197 more players to complete this set, and we have not yet even considered highlights, record breakers, managers, league leaders, and other essentials to tie this set together. We have all year, I'm sure we can pull this off.

I'm thinking that there's another should-be Hall of Fame Shortstop that we should include in this set. Alan Trammell. I was shocked to see that he wasn't in the 2001 set (at least on the checklist I saw). His low HOF support so far may be the biggest barrier to Larkin getting elected early on in his candidacy. Personally, I think that both should be in.

I love the inclusion of Larkin--I hope he gets elected to the Hall next year, although it may take a few years to gain enough votes for him to make it.

Grand Cards--couldn't agree more about Trammell. I think that the (hopeful) HOF induction of Larkin could clear the way for more support behind him.

Any set that has a Larkin card in it from now on would be a "must buy" set for me! I also like the 1989 Topps big card, though I'd have to look through my entire collection to see if that's the card I'd choose for Larkin.