It's Retro Sunday!!! We gave the Topps Card Randomizer the week off so we can highlight seven cards redeemed from Topps' Million Card Giveaway. Introducing the Random Topps Card of the Day for Sunday, February 28, 2010: 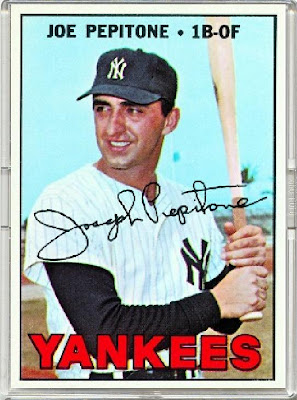 In case you're actually wondering, I don't own this card. And this time I was not able to get a crystal clean copy of the image from the Baseball Card Cyber Museum. However, thanks to Topps' new promotion, the Million Card Giveaway, and after figuring out how to find a card by it's numeric ID, I was able to snag the image you see above. For the record, the card in Topps' baseball card library is #8151.

Well, it's back to normal on Monday. and we're already into March. The Topps Card Randomizer back at work and has already selected the next seven cards we'll be looking at next week. Tomorrow's card will be: 1985 Topps #350. Post will arrive at 1:00 PM CST.

The design of the 1967 set is my favorite of the whole decade.