I should probably make more of an effort to post often. The comments I received were great and (ego...enough already...)

After reading the comments on my last post, I think it would be best to respond to them. Here goes.

SumoMenkoMan: While it's not necessarily overkill in terms of the number of insert sets (12), having a couple of insert sets that consist of more than 100 cards (150 Years of Professional Baseball, 1984 Topps 35th, Superstars) is a bit absurd. Okay, it wouldn't be the first time that there are 100-card insert sets within a series. But in the past, a set that would consist of 150 cards would be split among three series (1, 2, Update). The 150 Years set is this year's version of Topps Salute. Why put all 150 cards in one series??! The set itself consists of three distinct subjects (moments, players, seasons). I wouldn't have minded the set split this way. Topps has done it so many times. Why not with this set??!

bbcardz: Agreed. It's kind of misleading. Yes, there are more cards in a pack, but less packs in a box??! And you're still getting fewer cards in a box? It used to be that if you bought a jumbo box, you had a great shot at completing a set (or at worst, be short a card or two). Now? With the number of insert cards??!

Jeremya1um: We already emailed. Yes, I have the card: 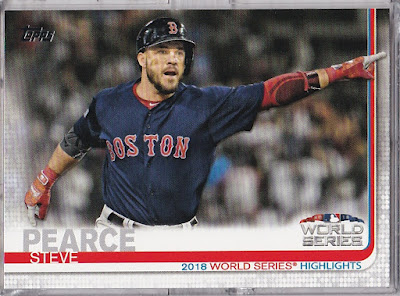 It is yours. You already sent me your address, and I will let you know when it gets shipped (as soon as I can get to the post office...hopefully tomorrow...if not by Wednesday).

Fuji: I wouldn't spend $1500 on a master set, especially when it doesn't have ALL THE SETS!!! But hey, I don't judge either. You spend what you want. But I do agree, I miss those days too. Inserts are supposed to be that bonus "wow" card that comes in a pack. Sadly, with the focus on relics and autos, these have become as ignored as the base cards.

Base Card Hero: We'll see if box prices drop. Heritage is coming soon, and people tend to go nuts when THAT product comes out. I'm keeping tabs on the two sets I still need on the Bay. One looks promising, the other might just become the set I will have to build card by card...unless of course prices drop like I hope they do.

Bulldog: If you've never done a master set, there is nothing wrong with it. I think if you're a set collector, you need to at least try for one. If you have the patience, and there are lots of sources for you to do it (shows, shops, trading, etc) in your world, pick a year and go for it. Right now, I'd recommend something from 2012-2015. By now, demand should be down for cards from those years, and cards and sets should be selling at decent (lower) prices than the year they were created.

Phil: I know, right??! The last two years have been brutal. Yes, again, I know this isn't the first time that Topps didn't put the full stats on the back of the card. But still, it was shocking not to have all that information on the back.

Swing And A Pop Up: Thanks. If I pull it off, I'll make sure to post.

Have a good night.

I think 2015 would be the year I would go for. You definitely have me thinking now...