I have finally finished simulating the All-Star Games using my 1993 End of Year All-Star Teams. Of the seven years worth of seasons that I have been doing this, if there ever were a pair of teams so evenly matched, the two teams that comprise my 1993 AL and NL teams would be it.

Yes, the AL wins the seven game series 4-3. But the NL wins the ever important "anything goes" series. Will this hold up for the one game ASG?

For the official All-Star Game, I decided to just simulate one game and one game only. The starting pitchers were McDowell and Burkett and I let them pitch two innings (unless they struggled badly). The rest of the pitchers would get one inning each (unless they struggled badly). The position players were replaced every three innings. No pinch hitters here, (as in previous tries, the pinch hitter is taken out of the game), and there was only one double switch.

The starting lineups, first for the American League (I'm using 1994 Topps cards because these are the cards I used to imagine my All-Star teams): 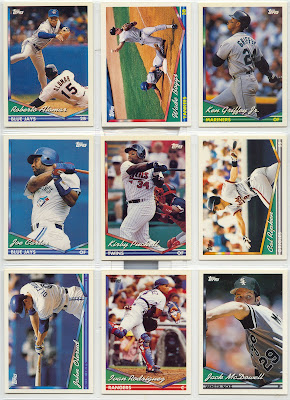 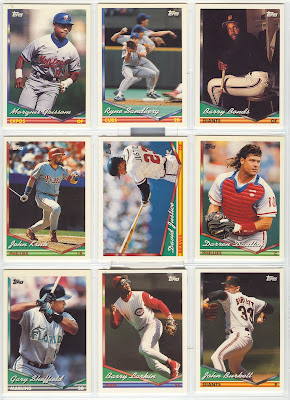 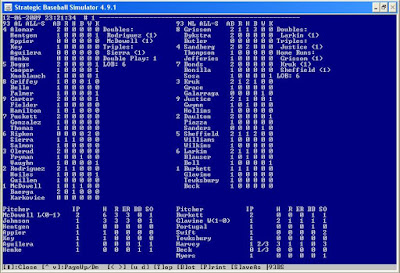 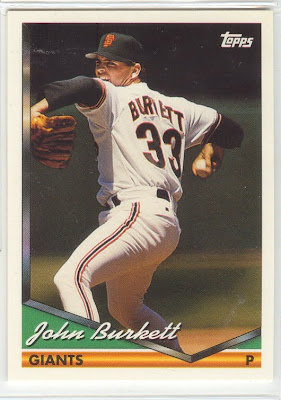 Starting pitcher John Burkett gets the MVP award not only because he pitched two scoreless innings but for his 1-1 performance at the plate.
If this game actually existed, the MVP would have been John Burkett (1-1, run scored, 2 inning pitched, no hits, no runs, one strikeout). He becomes the first pitcher to win the All-Star Game MVP award. He technically should have gotten the win too, but the fact that he didn't pitch five innings made the simulation award the win to Tom Glavine. McDowell takes the loss, and the only players who didn't get in the game were pitchers Mark Langston, Jeff Montgomery, and Duane Ward from the AL and Andy Benes & John Wetteland . 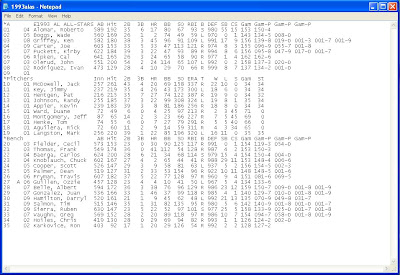 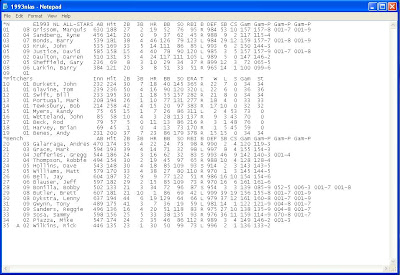 Now that the 1993 All-Star Games are officially over, on Tuesday, I will introduce the 1994 End of Year All-Star teams. Simulations for games with those rosters to come by Sunday night for a Monday morning recap.

I like the '94 card design, but I was out of collecting by the time they hit stores. The photography looks pretty good based on the starting lineups for your All-Star teams.