A Three Pack, Progress, and a Wantlist

Before I begin, I'd like to dedicate this blog post to my grandmothers, Leonor Anama (nee Filoteo) and Gloria Y. Nichols. Both were born in February, Leonor on February 24, and Gloria on February 25.

My daughter and I traveled to the local big box store to do a quick shopping run. While she went through the clearance aisle, I sauntered over to the card section, thinking about what to buy. I thought of buying a couple of packs, but for what purpose?

By now, I have a full set of the eponymous first series, and buying random packs wasn't as motivating. Same goes for blasters. Was the thrill already gone? I mean, yes it is now Heritage season, but I don't collect the brand. And short of the Pat Neshek tribute card to Lowell Palmer, I probably won't be starting on that set anytime soon. 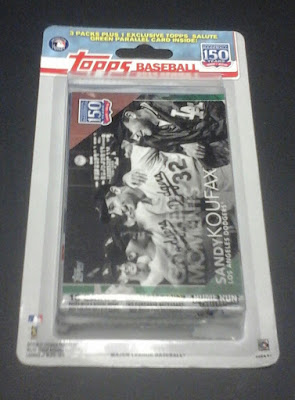 And suddenly, I found what I wanted to buy for the evening.

A three-pack of Series 1 with a bonus green parallel card. This one, with Sandy Koufax, came home with us along with the other things my daughter was looking for.

I am also in the process of putting the cards and sets I have into a binder. It's a 3-inch binder, but I'm starting to think it's not going to fit everything. I get the sinking feeling that a 6-inch binder isn't going to fit this set when all is said and done. I have almost all the cards. I'm missing one card from the Superstars retail set because the seller didn't realize it and gave me an extra card of a player already in the set, but he's aware of it and when he gets back from vacation he will be sending me the missing card. I also have the 50-card Iconic Reprints set coming soon (I have something to say about this too, but I'm going to need the set to arrive first).

In the meantime, until prices of the 150-card 150 Years of Baseball set go down to reasonable prices on the Bay (and this is before part 2 shows up in the next series), I have decided that I am going to build this set from scratch. Whether it be by buying lots or cards online or by trading. By now, I have enough base and insert cards, from a number of years, that I can trade to get my hands on the 67 cards I need to complete this set. Now, the big show coming to the convention down the street, the same one that is going to host the National in July/August, will take place in March. I just want to go to that show and take in the atmosphere. I would prefer to complete this set before then.

So, to the people who still manage to come to this humble, little blog. I need help. I am willing to trade for the 67 cards listed below. I've been known in the past to trade for everything I can find in a large want list just for one card. Base, insert, even autos or relics. It doesn't matter. If it's on your want list, and I have what you need (within reason...I still collect too you know), I will send all of it for whatever you can spare.

Email me at bdj610@hotmail.com, send me a DM on Twitter @bdj610, or leave a comment on the blog and let me know if you have any of the cards I need along with a want list of cards that you are looking for, and I will see what I can find for you.

I'll even put the bonus Koufax card on the trading block.

For now, I am just happy to have some packs to open.

Hope your two grandmothers enjoyed their special day and best of luck on this set! Wish I could help, but I won't be busting anymore 2019 Topps flagship.

I'm heading to a show on Saturday (I hope anyway). I'll see what I can grab if any. 2/25 is one of my daughters birthdays and also it was my mother's. Go G'mas!