You know, I forgot to redeem this card last year when I got it. So, thinking about how long it took last year from redemption to receiving last year's Red Hot Rookie card, I thought I'd be waiting until the end of the 2010 season to get my card. Anyway, I went ahead and redeemed this card in the middle of January. And after weeks of waiting, my 2009 Topps Red Hot Rookie Andrew McCutchen #3 card finally arrived. The card, contrary to what the scan looks like below, really does look cool. After initially thinking about trading it, I think I'll hold on to this one.

So in any event, redeeming one of these... 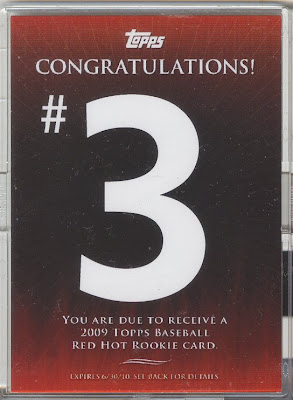 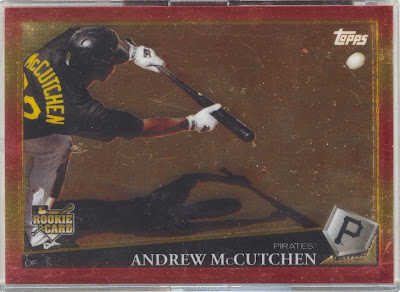 Forgive the picture, the card is a refractor after all. Nice shade of red (which you can't tell by the scan), and even though it's of a Pirates' outfielder, supposedly, he's one to keep an eye out for in 2010. Here's hoping, especially since Reporting Day is in less than FIVE DAYS!!!

JayBee Anama
Posted by James B. Anama at 2:30 PM

He is a good player and had a decent run last year in the bigs.

That's a cool photo, just wish it was a little bigger, Andrew is only halfway on the card! :)

This years should be cool too.