Revisiting the Idea of Topps Helping Kids Get Ready to Go Back to School... 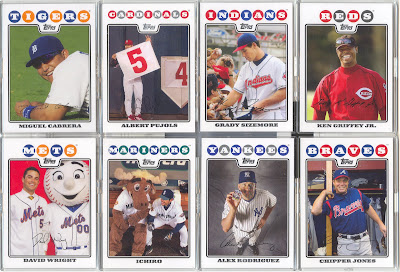 2008 Topps Back To School Set found exclusively at Target. Just what our kids need before they head back to school!!!
Some time last month, I discovered these cards found at the local Target near all the Back to School items and reported it here. I mentioned that there were two bonus cards in each package and based on the numbers I could see, I thought that it would be at least a ten card set.

Let's just say that I am hoping that I was wrong here and that there were really only eight cards total in this insert set. Why???

I went to three Target stores today, and found the following cards:

All other cards were the same five that I had found previously, and in many instances, the same combination (Griffey/Sizemore, Wright/Ichiro, Pujols/Jones, Sizemore/Jones).

So I am going to hope that there were only eight cards in this set and consider it completed. The rest of the players on the list (for those keeping track):

Now if somebody does find other cards that go with this set, please drop me a line, ask for my address, and send me what you found. Thank you very much.

JayBee Anama
Posted by James B. Anama at 3:46 PM

I contacted the distributer last month when these cards arrived at Target, Excel Distribution and they informed me that this set was an 8 card set. You have listed all of the cards correctly. In the Baltimore area, the AROD card was the most difficult to find.

Whoa! These are neat...we'll try to find them. Thanks for the tip.

Oh man I wish I had seen this post earlier. I love Griffey, but no chance they still have them...and there's not really a Target within reasonable distance from where I live. Maybe I'll go to the comic book shop tomorrow, and swing by Target while I'm out there.

I HAVE THE ALBERT PUJOLS 2008 TOPPS CARD TB2. I HAVE BEEN TRYING TO PRICE IT ONLINE (EVEN THROUGH BECKETT) BUT CANT SEEM TO FIND A PRICE FOR IT. ANY IDEAS HOW MUCH IT IS WORTH?
THANKS!
S. BURDICK
BURDICKS4@LIVE.COM