I Was Wondering Why Jose Oquendo Had 9 Different Autograph Cards in 2012 Topps Archives, Then It Hit Me...

Perusing the Bay, I was looking at the auctions for the autograph cards found in the latest and greatest 2012 Topps Archives set.  I'm not looking for anything in particular, just waiting for the day I actually have money that I don't have to use to pay for plumbing (those who friend me on facebook already know what I'm going through as I've already posted on there about my latest round of home dilemmas), mortgage, bills, etc...

Okay back to the point.

So I'm online, looking at the pictures of the Fan Favorite Autos, thinking that I could take a shot at a majority of these because after the set collectors finish their feeding frenzy, the rest should be easy to find on the cheap.  Then I noticed something about the Jose Oquendo autograph cards that did not seem to be prevalent with the rest of the checklist:

So here is the Oquendo base card.  Yes, the fonts are way off from the 1988 Topps design (the font used on the name is giving me fits...don't they keep a record of what fonts they used??!)  All seems normal here right?  Then I saw the autos.

Nothing out of the ordinary here as it was common in the ATFF cards to have autographed versions of the base card.  But what about this: 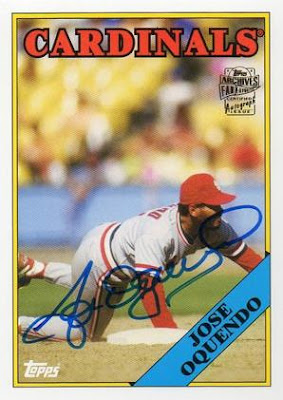 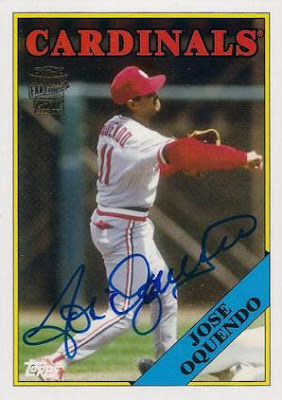 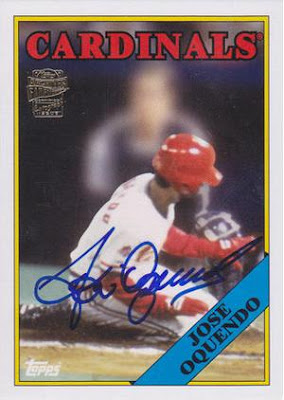 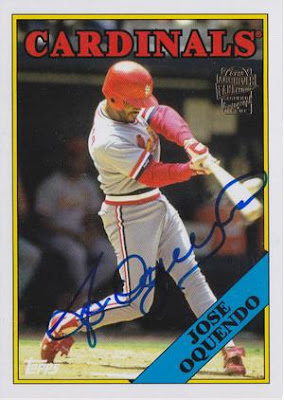 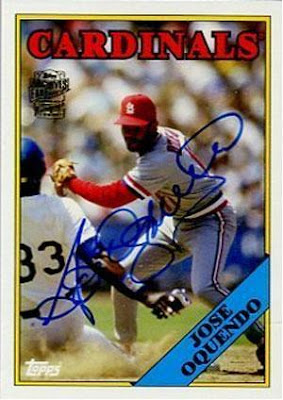 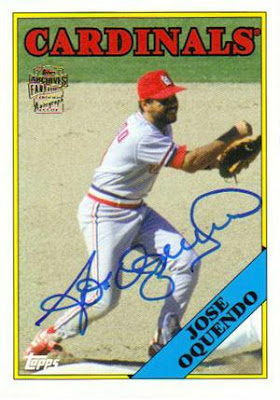 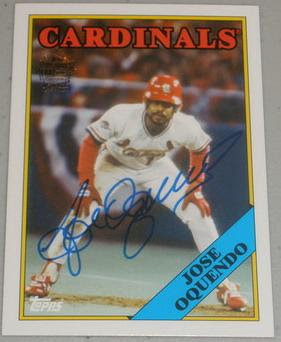 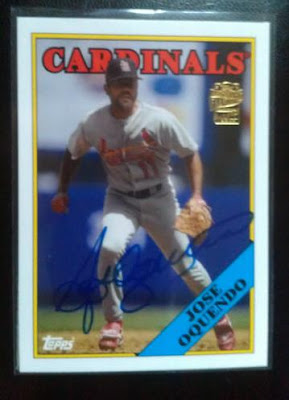 Nine Jose Oquendo autograph cards.  Why?  No offense to Cardinals fans (yes, this Cubs fan has been dying a slow death this year...and it's not even June yet)...but why nine cards of Jose Oquendo.  Yes, he had a great career as a Redbird, but why?  Then I went to his Baseball-Reference page and it hit me.  Take a look a the positions he played in 1988 (the year Topps used for his card): 4563/98721 (in 1987 his positions were the same except for 2).  This means that in 1988, he managed to play every position possible, including pitcher and catcher.  Was he really that versatile?  Was this madness?  Or did he really play every position that year?  The answers to the questions are yes, no, and absolutely.

Now while the novelty has been done that a player could change positions in every inning, Oquendo was asked to play all 9 positions at one point or another during the 1988 campaign.  Primarily an infielder, so not surprisingly he would play be comfortable in all four positions, he was sent to the outfield, caught a game late in the season, and during a 19-inning affair with the Atlanta Braves, left his position at first base to take the mound for three innings (took the loss, but still...).  Here is a recap of his year on the field (games played):

So if you're wondering why Jose Oquendo was honored with not one, not two, but NINE different autograph cards, there's your answer.  On the back of each card, it lists him at a different position to boot.  So you could easily obtain all nine cards and put it on a baseball diamond frame (yes, they made those).  Or put all nine on a sheet for your collection.

Heck, I might even take a stab at attempting this (anyone willing to help me???) if I had the funds.  Maybe.

JayBee Anama
Posted by James B. Anama at 9:23 PM

Thank God he didn't play for the Rangers!

And....they'd fit nicely into one nine pocket sheet. That would be pretty cool I think.

I TOTALLY remember this from Super Duper Baseball bloopers... or Baseball in the 80s... one of those VHS tapes they gave you way back when for subscribing to SI or TSN or something. They spliced together clips of him playing each position so it looked like he was doing it all at once.

As for Topps... it would have been alot less stupid if each card showed him at the position. Or if they at least used a design that listed the position on the front. C'mon, Topps, this shouldn't be that hard.

The choice to use different fonts than the original must have been deliberate. BUT WHY?? The new fonts aren't even consistent with each other. Compare your Oquendos to George Sisler here:
http://4.bp.blogspot.com/-x6x4la3pd7k/TxIUnN6kRQI/AAAAAAAABQI/S88I9YNIqxU/s1600/img507.jpg

That there is no other "Browns" card to compare it to makes that one less jarring, but I would value them so much more if the design was identical to the originals, including the fonts.

No wonder Mike Shannon dubbed him "the secret weapon", his versatility ranked among the highest of the modern era. He even pitched 4 innings in one game the following year after he played all 9 position.