An Autograph Card You Won't Find in 2008 Topps Allen & Ginter

I mentioned in my post regarding the 2009 Topps Allen & Ginter sell sheets that in amongst the champions is a guy named Jason Wong. If you missed the article, and for that matter are still wondering as to who Jason Wong is, he's the guy that cracked the Allen & Ginter code from last year, winning himself a spot on the 350 card checklist!!!

I linked his site to the article (which you can check here), and he sent me an e-mail thanking me for the link. He offered an autographed card of the A&G Code contest card as a thank you. Not one to say no to a free card, I said thank you, congratulated him on breaking the code & getting a card in this year's set, and said I'd like to have one.

Yesterday afternoon, this card arrived in the mail: 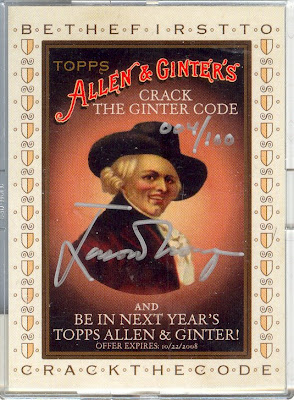 Along with this card, he sent two MORE autographed cards, and a note that read:

"I read on your profile from the blog you have a daughter & son. I included an auto card (not #'ed) for each of them. Thanks again & enjoy the cards. - Jason Wong"

Now how cool is that? Each of my kids has their own card in their possession. My daughter added it to her binder, my son has it on his table and will later find a better place for it.

Thanks you again, Jason for the auto cards. And once again, congratulations on Cracking the Ginter code. You're going to let the rest of us have a chance at it this year...right??? I know the prize is not getting us in the set (according to the sell sheets, the winner gets "a special Ginter Code Winners Set of autographs from every framed autograph subject in 2009 A & G"), but still, it's something.

Awesome story! Reading something like this reaffirms my decision to get back into a hobby I once thoroughly enjoyed. Thanks for washing away another bit of the cynicism I developed in the mid-90's.