To paraphrase a famous baseball slugger, "Trading has been very, very good to me."

Last night, a card came in the mail, stating that I had to go to the post office to pick up a package. When I saw the name, I knew what it was for, and couldn't wait to go pick it up in the morning. But first, I looked back and remembered what an ordeal it was just to get the card.

Initially, this guy was asking for the 2009 Topps Legends letter patches. I offered him both my Ryan and Ripken patches, and asked him if he had some of the short prints that I'm looking for. The e-mails went back and forth (these is not conversation, rather than a summary of what each e-mail said).

Him: I have both the Ty Cobb and Jackie Robinson cards.
Me: I'll offer both of my patches and anything else that I got from the box break.
Him: Need the Ripken patch only, but also liked the Kunz auto and the Randy Johnson black card.
Me: I'll put it all together for both cards.
Him: Will take the Ripken and the Kunz for one of the SP's.
Me: Why? I want both.
Him: I know where you're coming from, but somebody else wants these too.
Me: I want both. What will it take to get both? Will offer other cards.
Him: Tells me to decide, not knowing if and when the other party responds.
Me: (after much thought and complaining), Have the other person decide. I'll take the other.
Him: Other party decided on Jackie. You get the Cobb.
Me: Fine with me. Thanks.

Cards were mailed on Friday. He receives on Monday. I have to wait because he put in signature confirmation on it. So I got to the post office, handed the clerk the pick up card, she hands me an envelope, has me sign that I received it, and here is the end result: 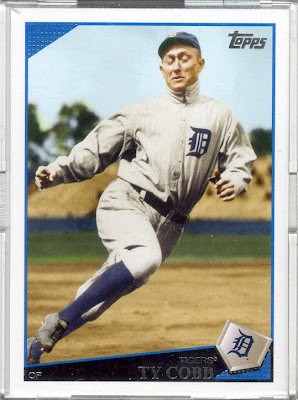 Ty Cobb #66.
To Tim Guillotte from the Topps Message Boards, thank you very much for the card. I really wanted both cards, and was willing to give you more than what you wanted. But that's me being selfish. At least someone else was able to get their wantlist down by one card.

I now have three on hand, two hopefully on their way, and many more to find. And so the quest continues.