This will be my first attempt at trying to manipulate a multi-player card into a one player card. In 2001 Topps Archives, many players' "first" card was actually shared with other players, most often players who didn't pan out in the majors. For example, quickly...name the three other guys on the card with Willie Stargell???

If you guessed Brock Davis, Jim Gosger, and John Herrnstein, either you have the card in front of you right this very minute, or you truly are a Topps expert. My point? It made sense that in 2001 edition of the Archives set that they took the other three guys out of the picture and enlarged the red circle that contained the headshot of Stargell. Yes, it looked weird, but at least you knew who was being featured.

So I'm going to try it here and now. And if it works, it will lead to many more cards being "cropped and enlarged" to feature that one player who, out of the three or four players pictured, became the star that we want to use for our Archives project. And who better to start this with than a man who played for more than twenty years, played any position asked of him (and rather well too), won a World Series title, and came back home to get his 3000th hit? I'm talking about none other than Hall of Famer Paul Molitor.

Paul Molitor signed with the Milwaukee Brewers in 1977, and made it to the majors the following season. For fifteen seasons, Molitor was the sparkplug to the Brewers' offense. He could hit for power (234 home runs), he could steal bases (504 lifetime), he was a patient hitter (walked 1094 times), and hit for average (lifetime .306 hitter with 3,319 total hits). No wonder he was called the Ignitor.

During his time with Milwaukee, Molitor was a five-time All-Star, a two-time Silver Slugger winner, and managed to appear on a number of MVP ballots. He played in any position that he was asked. Primarily an infielder, he appeared at all four positions during his career, mostly playing third and second base. He was sent to the outfield for one year (1981) to take advantage of his speed, but was then returned to the infield the following year. He led the 1982 team, affectionately known as "Harvey's Wallbangers" to the World Series against St. Louis. And although the Brewers eventually were defeated in seven games, Molitor kept them in the games with 11 hits and thre runs batted in during the series.

After the 1992 season, the veteran was granted free agency. He landed with the Toronto Blue Jays in 1993 and was used primarily as the team's designated hitter. No longer having to worry about playing the field on a regular basis (although he did play at first base on occasions) did wonders for his hitting. As part of the high powered Blue Jays offense, Molitor hit 22 home runs (his career high) and drove home 111 runs batted in. As Toronto made it back to the World Series that year, Molitor led the way, with a .500 batting average, 2 doubles, 2 triples, 2 home runs, and eight RBI's.

After three years with the Jays, and his career starting to wind down, he signed with his hometown team, the Minnesota Twins, to play out the rest of his career. He again was used as a designated hitter, and on September 16, 1996, got his 3000th hit, a triple against the Kansas City Royals. 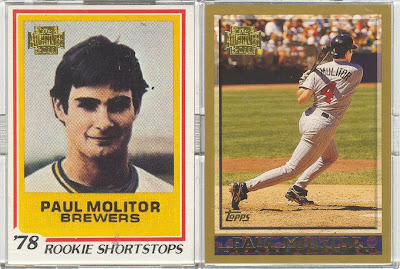 First card: 1978 Topps #707. Last card: 1998 Topps #291.
During the 80's, many kids growing up as Brewers fans either cheered for Paul or Robin. Both were star players in their own rights. In fact, there is a blog named solely because of this reason. But Robin was included in the 2001 Topps Archives set. Molitor was not. That, along with all the other numbers above, gives us more than enough reason to add Paul Molitor to the 2011 Topps Archives Project.

Even though I've been a Cubs and Bears fan all my life, in my teen years I rebelled against the Cubs and Bears and followed the 1982 Brewers and San Diego Chargers. Both teams were fun to watch. Molitor was my favorite player on the '82 True Blue Brew Crew. Of course now I hate the Brewers. :)