Friend of the blog, frequent commenter, and all around good guy tdlindgren sent me an e-mail this morning, telling me that he found a couple of 2009 Topps Team sets on the Bay this morning. That definitely got my attention this morning. Thanks for the tip, Tim.

I spent part of my afternoon working, of course, but also checking out what Tim was talking about. I can't get the Bay at work, but thanks to Google, I could find other places that was selling these sets. And after a half hour of digging for information, I have to tell you that I can't wait to get my hands on these sets.

Since 2006, Topps has been packaging 14-card team sets for each of the 30 MLB teams. These sets include cards from series 1 that we've already seen, a preview of what the series 2 cards are going to look like, and cards of players who may have been on a different team in series 1 but are now pictured in the uniform of their new team exclusively for this set. These sets are great for any kind of collector, whether you are a team collector, a player collector, or if you're as crazy as I am, a set collector (and I should know, I have all 30 team sets from 2006, 2007, and 2008). And they can be found in many places, from your neighborhood big box store (Walmart, Target, etc) to your favorite ball park.

This year, Topps has added a couple of extras to each of the team sets. For starters, each 14 card set comes with a card case to hold all the cards together (which is an upgrade over the having the cards shuffle around in a flimsy plastic shell), and each set comes with a free BONUS EXCLUSIVE CARD that you can only get in these sets. All 30 teams have an exclusive card (and you can see what it is on the package...for the most part anyway. See picture below for a couple of examples: 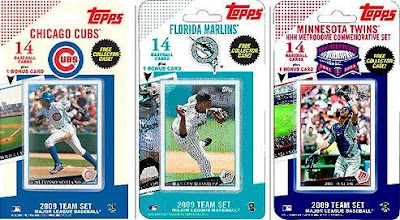 Based on each of the 30 packages, the bonus card is either of the team's home stadium, their mascot(s), or their managers, with a couple of surprises along the way. Although I was not able to figure out what three of the bonus cards are (picture was to blurry, did not show the subject, or was just too hard to tell as to who it was), this is the list of extras. Check out what each team's exclusive card is:
Also, just to give fans a heads up, the 55-card gift sets are back. However, only the Red Sox and Yankees get the box treatment. 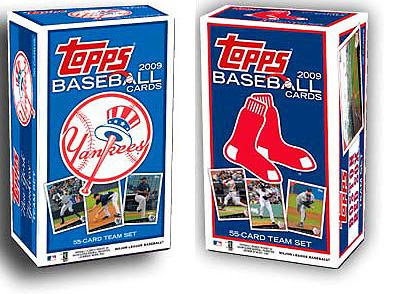 Plus, I hope you're hungry. Because the Cereal Boxes come back for Topps Series 2. And the cover boys are Jackie Robinson, Lou Gehrig, and Ty Cobb.

Opening Day is less than a week away. And Topps Series 2 is coming in May. What a time to be a baseball card collector.

Thanks for the update. I'm disappointed that the Mets aren't getting the 55-card set treatment this year.

I think Topps killed them by sticking an autograph in last year's set and jacking up the price accordingly.

It clearly has nothing to do with on-field disappointments, or the Yankees wouldn't be making the cut either. ;)

Thanks JayBee for the kind words and all the research! Your blog is always so informative!

I'll pickup the Yankees set for sure since Mantle is in it and being a Cubs fan I might get the Cubs set with the Wrigley Field card. It looks pretty cool.

I'm assuming the Angels extra card is that of their Manager Mike Scioscia as you can see part of the dugout in th background.

Also, the Indians extra card appears to be a pitcher, you can see part of the mound and a glove, so perhaps Cliff Lee?

The BlueJays is anyone's guess, as all you see is an arm.

Looks like I'll be buying the Dodger team set online.

The only team sets you can find around here are the Mets and Yankees (once in awhile the Red Sox will appear), and they all just seem to SIT there. If they threw the Dodgers team set in there, at least they would sell ONE.

I agree with Paul completely. I wonder if they didn't sell as many Mets 55-card sets last year -- I know I didn't buy one because I didn't feel like ponying up $50 for an auto of a guy I already had -- so they assumed there was no longer a market for a Mets set. Idiots.

And seriously? Citi Field? You couldn't give us another Mr. Met card? You suck, Topps.

topps has been pimpin' that same picture of paws for like 5 years!!!

I would say that the Angels will be Scioscia, he's in series 2. The Blue Jays is Cito Gaston from Series 1, the Braves is Bobby Cox from series1. The Indians is a guess that it is Masa Kobayashi. He's not listed in either set, unless he is an unnamed RC in Series2. He is the only Indians pitcher I can find that is right-handed, and uses a tan glove. I may be wrong on all, just my $.02

First time i have visited your blog,Its give us some useful information about to the Card team sets Are Out.
Thanks for advice.

Your work is really appreciable. Thanks for sharing such a nice information about to the sport cards.

Cool!!! I enjoyed reading your blog