Many names have been flying into my comments bin in the last few days for the 2001 Topps Archives project. And it looks like I should have no problems using most of them. Thanks to all who've suggested players for this ambitious task.

Anyway, I was thinking about what year to cut off the "first" cards for the players, further limiting the pool a bit. In 2001 Topps Archives, the last year of any of the "first year" cards reprinted was 1985. So guys like Kirby Puckett were able to make the set. Should we do the same? Should we have a cut off as well, say 1995? Can we go a couple of years further?

Today's subject was chosen not only because of a reader suggestion, but because thanks to the MLB Network, I was inspired to use him as a subject. The Network had recently shown a segment about the day Craig Biggio got his 3000th hit. On June 28, 2007, Craig Biggio went 5 for 6, all singles. His 3000th hit came in the bottom of the seventh inning. Yes, he drove in a run, but he was tagged out at second trying to stretch his single into a double. Although the Astros won the game in the 11th inning thanks to a Carlos Lee grand slam, the day certainly belonged to "B-G-O".

I realized that we are now in an era where we are not going to see many players stay with their original team for their entire career. I am pretty sure you can count on your hand the number of active 10-5 players (ten year veterans with five years on the same team...guys who have a say on trade proposals) who've been with their first team for more than ten years. Biggio was one of them, playing in an astounding 20 seasons with the Astros.

A seven-time All-Star, he played wherever the Astros manager wanted him to play. From catcher, to second base, to center field, to left field, back to second base, he will always be remembered for his unselfishness, and the way he played on the field. For this, and other reasons, we are going to add this future Hall-of-Famer to the 2011 Topps Archives set. 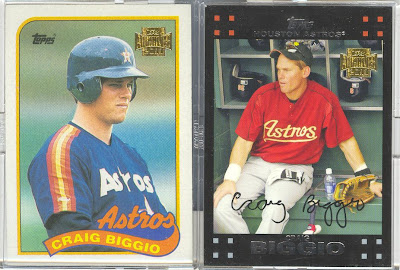 This looks like a fun project for you JayBee. Let's hope the powers that be at Topps read this blog and bring back Topps Archives in 2011.

Biggio is a terrific selection. As a Cubs fan I am partial to Ryno, but Biggio was absolutely one of the top 2B of this era and a sure-fire Hall of Famer.