I've finally come up with a name for the segment where I respond to questions and comments on this humble little blog. And I will make sure to do these posts towards the end of the month. Click on the name of the person who left the comment to see what he or she said (if you'd like). Here goes.

To the Hamiltonian, I didn't know that Eric left. I did leave an e-mail with Beckett, along with making an edit to their Beckettpedia section regarding their labeling of the KMart Rookie Variation cards. They still have them (only the first series) listed as 2009 Topps cards though. I do hope that people aren't thrown off by it.

To the night owl, the guy either works really fast, or has tons of money to spend. Not only did he have the gold set done in such a short period of time, but he also had all 19 SP's, and was almost done with the Black set (I'm sure he's done by now). Now that's extreme. But hey, whatever works right???

To FanofReds, if it was a real game, and the President was either at the plate or on the mound, would you like to be the guy to "show him up" by hitting a home run off him or striking him out??? I do agree with you though, but that's probably why his card is a short print. You can't have the most powerful card out there available to everybody I guess.

To This is That was Great, if the Pujols was more valuable to me than the Mathewson card, I would have kept it. I'd rather have the Mathewson. Considering that I had already apologized to the guy, thanked him profusely, and even thanked him AGAIN because the cards he gave me helped me get the Speaker card, I think I'll be fine. If you were in my shoes, I'm sure you would have thought and done the same thing under the EXACT SAME CIRCUMSTANCES. Hindsight is 20-20 you know.

To Chris D'Orso, there were 21 cards from the autograph list of 2003 Topps All-Time Fan Favorites that did not have a base card. On the original checklist from the Topps Website, there was going to be more than 100 of them (if I could find my lists, I could give you that information as well). By the time the product came out, as I was comparing checklists, there were only 21 names that did not appear in the base set. I don't really collect autograph cards, but I did want to see what these other cards looked like and what design they used. So in the summer of 2003, I went on the quest to find the 21 autographed cards. I have 20 of the existing ones, there was one that I think was never distributed, and I'll explain why in a minute.

The players who have autographed cards but not included in the base set are (pictures below, year of Topps design in parenthesis): 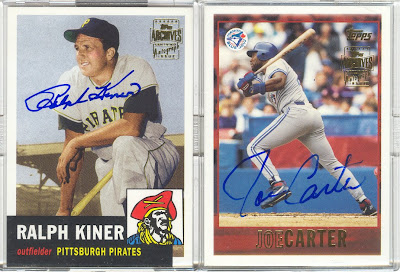 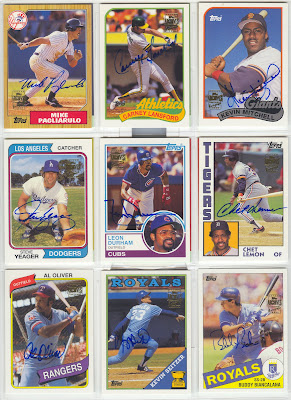 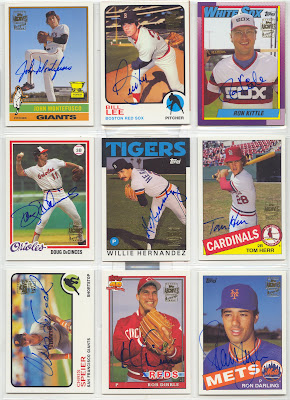 At this time, he was having health problems and most likely was unable to sign any of the cards he was given...none have ever surfaced as far as I know. I did have the redemption card, but got a Chad Qualls Topps Finest Autograph card in it's place. The thing that gets me is that image and design used on the Kiner card was used the following year when Topps did include him in the base set. The problem though is that they also included autograph cards of Kiner in the checklist. Guess what they look like??!

To capewood, I get those problems too sometimes, but I think it all depends on how quickly the blogrolls or feeds update not just on the Sports Card Blogroll, but for anyone's blogroll as well. It may also depend on the computer you're using. I know that there are times that I click on someone's site, and they've already posted two or three new articles and my site has not updated. And I know that my blog doesn't get updated right away on the blogroll, so it's never "up-to-the-minute" updated.

To friend of the blog tdlindgren, Craig is the best, isn't he? I still can't believe how generous the guy is. And since Heritage came out, he's been more active on his own blog. So he's been a busy guy. Then again, unless Topps decides to put another card in the actual checklist (like the Santana #661 card), then the gloves come off. You wouldn't want to give up that Gehrig card would you??? Just kidding. I'll find my own.

Also, I think it's because they used the 17 CMG guys in an Allen & Ginter mini insert set last year (I think it was called Legends of Baseball). That might be why they're not in the base set for this year's 2009 A&G set. But then again, it's Topps. Who knows what they might do.

Jason Wong, the champion code breaker himself, e-mailed Tto thank me for posting the Allen & Ginter sell sheets. He's sending an autographed card (the "Crack the Code" promo card from last year). Scans will be forthcoming.

To friend of the blog the drizz, and just think, at the beginning of this month, I wasn't sure that I'd even get one SP, let alone 14. The goal is to get all 19 before Series II. I think I have a shot.

To paulsrandomstuff, I thought it was weird that they'd pick 2008 as the time to honor the 1986 Mets. I'm guessing that they cut it down to just the Red Sox and Yankees because they are the big sellers, and having six of these 55 card gift sets were too much to handle. It stinks, in my opinion. They should have at least made the Cubs set as they've been given the 55-card treatment at the same time.

That's it for the mailbag. Keep those comments coming. I still need a lot of suggestions for who to include in the 2011 Topps Archives project. I have at least 100 names, so that's enough for a full Series I. But keep them coming. And I promise to be more consistent with the cards for the project.