A Foxx Has Joined the SP Party.

It was either a stroke of good timing or just plain old luck, but whatever it was, I now have 14 of the 2009 Topps SP cards, and I owe it all to Joe Hoelscher.

Yes, the man who also sent me the Tris Speaker card, bought more packs, and pulled another SP card. I had just written my thank you to Mr. Hoelscher via e-mail (and on this post), then went onto my favorite message board ever...the Topps Message Board (Topps Blog, Topps Message Board...what can I say...I'm hooked on the stuff). On the same post that smokingjoe posted his want lists, he also included his trade list, and next to the letters "SP:" was Jimmie Foxx. I immediately e-mailed the man back, asking what it would take to trade for it, knowing that I had already traded a number of gold cards to him. He pointed out that he had another want list posted somewhere on the boards.

A couple of days later, I was able to pull a good number of cards for him and e-mailed him back. He replied that he will mail the card on Monday. A day later, checking on the boards again, I saw a post from another member of the TMB interested in the Foxx card, and smokingjoe responded in kind. Now I became concerned. Am I even getting this card? After another e-mail to Joe making sure that the deal was still on, he responded that yes, the card was in the mail, and in fact, he somehow managed to get TWO Foxx cards. Works for me.

His card came in the mail today. So now, thanks to the generosity of Mr. Hoelscher, I am now the proud owner of a card of "Double X": 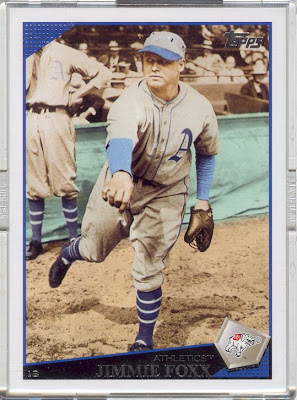 Jimmie Foxx #200.
Your cards should be coming soon, Joe. Please let me know when you get them.

dude jaybee you're knockin' the sp's out the box!!!!

Well done. I actually pulled a Foxx yesterday and was going to check in to see if you had it. I guess my question was answered. Good luck on tracking the rest down!