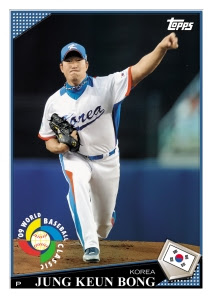 Those holding those World Baseball Classic Redemption cards better get them logged in to Topps quickly as it has just been announced that card #9 is of Jung Keun Bong of Korea, and #10 is of Daisuke Matsuzaka of Japan. 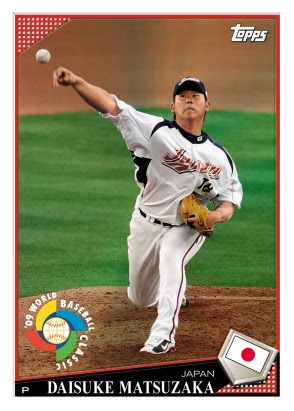 Daisuke Matsuzaka started and earned the win in all three games he started. He walked 5, struck out 13, with an ERA of 2.45, and gave up 14 hits in 14.2 innings of work. He was the pitcher that beat Team USA and helped Japan reach the WBC finals for the second tournament in a row.

None of the cards are autographed. For fans of either the Korean, or Japanese teams, you will certainly want to add these cards to your collections. So for those of you with Redemption card #'s 9 & 10, START REDEEMING!!!

JayBee Anama
Posted by James B. Anama at 8:40 AM