Before I begin, I'd like to thank those who've left me suggestions as to who to include in this set. I can assure you that I can use many of them. Some of the suggestions though will have to be tossed because the players did appear in the 2001 Topps Archives set. So, players like Larry Bowa, Wade Boggs, and George Foster won't be seen here.

I now have suggestions for Managers to include. And while guys like Joe Torre and Bobby Cox were suggested, I think I'll keep the 10 spots restricted to retired managers. Bob Brenly, although not currently managing, would be a good person to use. But he's still quite young (for manager material anyway), and was last seen interviewing for the Brewers job. Maybe Cox and Torre will be in the 2021 set. Until then, I can't use them. I've been doing some research, and think I have a few names (bit of a preview, recently inducted HOF manager Dick Williams is one of them).

On to today's subject. When I first started watching baseball games, the Cubs had veteran Leon "Bull" Durham manning first base. In fact, the Bull had been the teams first baseman since 1981. But in 1988, he struggled at the plate with a .219 average, 3 HR's, and 6 RBI's. General Manager Jim Frey, ironically, Durham's manager during that magical 1984 season, thought that Durham needed a change of scenery to get back his hitting stroke. So, he traded "the Bull" to the Cincinnati Reds, and brought up from the AAA team in Iowa a 24-year-old kid named Mark Grace. And from 1988-2000, the Cubs didn't have to find another person to play first base.

Mark Grace was not your typical first baseman. He didn't hit for power, and even though he batted either third or fourth in the lineup, never drove in more than 100 runs in any season (98 was his high water mark). But what he did well was hit. And in his thirteen years with the Boys in Blue, he hit above the .300 mark nine times, with a .331 in 1996 his highest.

During the 1989 playoffs, Gracie was one of the bright spots in what otherwise was another disappointing post-season for the Cubs. He hit an astounding .647 (11 for 17) hit a home run, drove in eight runs during the five game series against the Giants. He reached the postseason only one other time with the Cubs in 1998. At the end of the 2000 season, after many years of signing one-year contracts, he was granted free agency, and signed with the Arizona Diamondbacks. And what did the D-backs do in 2001??? Win the World Series!!! Gracie finally became a champion. In the seventh game against the Yankees, Grace went 3 for 4, and kept the Snakes in the game with a ninth inning hit to leading off against Mariano Rivera. Amazing indeed.

Grace ended his career in 2003 with a career batting average of .303, 173 home runs, and 1176 runs batted in. He was a patient hitter, walking over 1,075 times while being struck out 645. He placed second in the Rookie of the Year voting (behind Chris Sabo), was an All-Star three times, and was even in the running for MVP four times. This is why I am adding him to the 2011 Topps Archives checklist.

But now I have a problem...

Since the 80's, many players have rookie cards (or XRC's) within Topps' traded sets. Grace is one of them. Do I use his 1988 Topps Traded card or do I use his 1989 Topps card for the "first" card? I'm pretty sure I'll be coming up to this same problem later on with a lot of other players, especially since a majority of them will be coming from the 80's and 90's. So what do I do???

I guess I'll use this question as my first poll question ever on this blog. Should I use the Traded or Updates & Highlights cards of players to be used for this set as their "first" card? I know that in the 2001 Topps set, the reprinted "last" card of Ron Cey was his traded card, so I think I can get away with that? But how about the "first" card?

In the mean time, I'll put both his 1988 Topps Traded card and his 1989 Topps card along with his 2003 final card on display. Let me know which looks better, and for the rest of this series I will use whatever you suggest after the results of the poll are in.

So, in the meantime, here are the cards for Mark Grace. Option number 1: 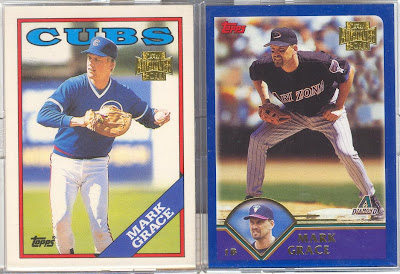 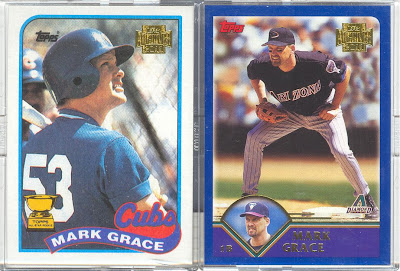 Love the look of that '89 card, although you may be leaving yourself open to a future What Were They Thinking?!?! post by a blogger to-be by not using his first card.

Ah yes, Mark Grace. Being a Cubs fan I loved watching him hit and he was a great fielder as well. I like both cards and since Topps reprinted his 1989 card in the 2005 Topps Rookie Cup reprints, why not use his 1988 Topps Traded.