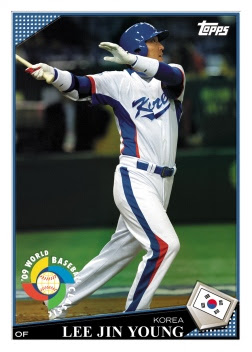 Those holding those World Baseball Classic Redemption cards better get them logged in to Topps quickly as it has just been announced that card #1 is of Lee Jin Young of the South Korea and #2 is of Derek Jeter of Team USA.

Neither card is autographed. For both fans of either the Korean team or of Team USA, you will certainly want to add either of these cards to your collections. So for those of you with Redemption card #'s 1 & 2, START REDEEMING!!!

JayBee Anama
Posted by James B. Anama at 5:31 PM

those look cool. any word on the wbc set that was suppossed to hit the stores today? are they gonna look like these?