If This is His Topps Card, Then What Card is This?: Chipper Jones

In between the 2011 Topps Archives posts, I thought it might be a good idea to try and bring back some of the kinds of posts I haven't done in a while. No, I'm not running out of ideas, but I might be running out of variation cards to show off. The reason why I'm doing this today is that my son is sick and I'm at home for part of the day. And I'm also doing this because I want to see if I can get a certain blogger out of hiding (while he's been active, he hasn't been posting with the reckless abandon I've been accustomed to lately, so I just want to make sure he's all right).

For new readers of the blog, this is one of my favorite segments infrequently featured here called, "What Card is This???" The concept is simple, I show two cards of a player, one his actual Topps card from a particular year, the other is a card with the same design, but a noticeable difference. Now, keep in mind, both cards are real (meaning I did not alter or create another card to throw people off), but the other card is not from the regular (or traded) Topps set, so I ask "What Card is This???" looking to see if people can correctly guess what set the second card is from.

Today's subject has been appearing regularly on Topps cards since 1991, and I think it's because he was drafted by the Braves in 1990 that their fortunes changed from being the NL West doormat, to the dominant team that we all remember throughout the 1990's and 2000's. He showed the rest of the National League that the Braves had more than just a powerful pitching staff (and when you had Smoltz, Glavine, and Maddux on your rotation, domination is an understatement), but had a fantastic offense that scored enough runs to win ballgames. He may not have won the NL Rookie of the year in 1995, but he has now become the face of the franchise. Today, I give you, Larry Wayne Jones.

Oh I'm sorry. I think most everyone knows him by the name "Chipper." (chip-of-the-old-block...from his dad)

The name Chipper just screams baseball player, doesn't it? Even on his first Topps card, as a senior on the Bolles School baseball team, his card referred to him as Chipper Jones. You just knew that this "kid" had a future in the Majors. But he was drafted by the lowly Braves, a team that for most of the 80's, was not all that great. In fact, I remember visiting Atlanta and I saw a bumper sticker that read, "Go Braves...And Take the Falcons With You!!!" Ouch. You had to feel bad for him.

But then the team's fortunes turned around. They won the NL West, and pushed the Twins to the limit in the 1991 World Series. Lucky? Perhaps. But then they made it back to the WS the following year. After a two year layoff, they finally won the big one. And who was on that team? You guessed it...Chipper. The Braves won their division for fifteen consecutive seasons (1991-2005). And although they've won the whole thing once, they were always there, ready to play into the middle of October.

So enough about his career. Let's get to the cards.

Chipper was named to the Topps All-Star Rookie Team in 1995, meaning that his 1996 card would have the Rookie Cup on it as well. The 1996 Topps design was a very good looking design. It is remembered for using really large pictures, the Topps logo one side, the team logo on the other side, and the only semblance of a design was a bluish rectangular box that featured the player's name and a close up of the player's head (from the large picture). And if you look hard enough, you'll see on the bottom of each of the player cards there is either a green or red shadow line by the blue name plate. Green for all National League players, red for the American Leaguers. Which makes sense. Until 2009, there was always a "Green Book" that had all the NL information, and a "Red Book" for the AL. And both colors would be more prominent in the 1997 design as all NL players were surrounded by green frames, and the AL players in red...I'm getting away from the point again aren't I???

So here is the 1996 Topps Chipper Jones card, fresh off the World Series Appearance: 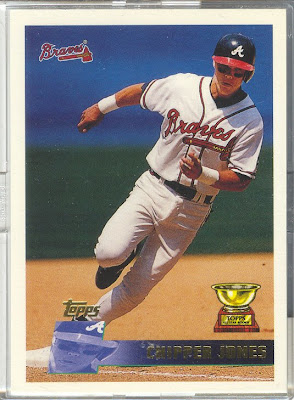 Didn't I tell you that the 1996 Topps design was good looking??? Large action shot of Chipper racing around the base paths. Awesome shot. There's that Rookie Cup on Chipper's left. Great card overall.

So with that in mind, here is card number two: 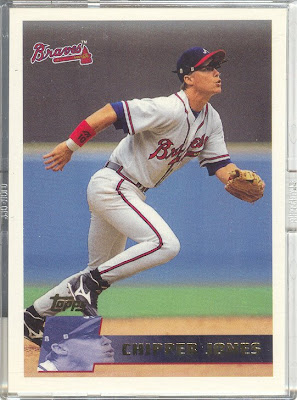 Wait...he's now on the field, running towards what looks to be a ball between third and short. What's really funny about this pose is that if you look at the head shot where his name is, it does look like he's blow the foil letters off the card. But where the green shadow is now replaced with a red (did the Braves play in the AL???), and the Rookie Cup is missing.

So now it is time to ask that all important question...

What Card is This???
Leave your guesses in the comments. The correct answer will be revealed later in the week. Have fun. Now it's time to check on my son.

Anyway, RoofGod said it's a card from Post Cereal. Offy says it's "the Chipper from the team sets that Topps released that year." While I'm more inclined to say that Offy could be right (I don't know what set you're referring to), the card that was actually used for this edition of "What Card is This?" was a sample card that was distributed to hobby shops and media before the actual set came out. This card, #PP5, is from the 1996 Topps Preproduction set.

Thanks for playing. And, going over some of my albums, I do have a few more cards I can use for this segment after all. Hooray!!! jba
Posted by James B. Anama at 10:21 AM

Email ThisBlogThis!Share to TwitterShare to FacebookShare to Pinterest
Labels: 1996, topps, What Card is This?

That's the Chipper from the team sets that Topps released that year. I've got the Piazza from the Dodgers team set. Those have a logo on them commemorating 25 seasons of Dodgers Stadium.