What We Found at the Chicago Sun-Times Show...

Being literally up the street from the Donald Stephens Convention Center allows me the ability (and no excuses) to go to any sports cards shows being held there. Whether it's the National, or the Chicago Sun-Times shows, I try and get down there at least one day out of the weekend (traditionally Saturdays). Today, my daughter and I made the trip down to Rosemont for the spring Sun-Times show, hoping to find cards to whittle down the want list.

Normally, this show is packed wall to wall with dealers and buyers. This year, they cordoned off a small section of dead space that would normally be filled with one of the smaller sealed box sellers and other random dealers. But with $180.00 in hand, it was time to go shopping.

Now, the advantage of bringing one of the kids with me is that some of the dealers were willing to give her free cards. She bought two Micah Hoffpauir Upper Deck Timelines (yeah, I know, she doesn't know the difference yet) and got one Kosuke Fukudome Timelines card absolutely free. She also was allowed to pick a card from a dealer who said that she must be very patient to have her dad drag her along everywhere. Her reward? A 2007 Topps Chrome Basketball Ben Wallace card. She also got a 2008 UD Masterpieces Derrek Lee card for free (she was going to give the man a quarter, but the guy said she could keep it). Other than a jumbo pack of 2009 Topps (to make her daddy feel better), she didn't spend too much. Her dad on the other hand???

The main goal was to look for the SP variation cards from 2009 Topps Series I. Not too many dealers were carrying them, but I was able to locate three. The first one came from my favorite dealers from New York, who always happens to be at every Sun-Times show. These people have been doing these shows for a long time, and seem to set up in the same place EVERY TIME. I've been to about seven of these shows, and by now know exactly where to go if I wanted to look for them. I did bring a few of my relic cards, hoping to trade or sell them to get some of the cards I wanted. And for the price of the 2009 Topps Nolan Ryan "N" patch card, and $20.00, I now have this card: 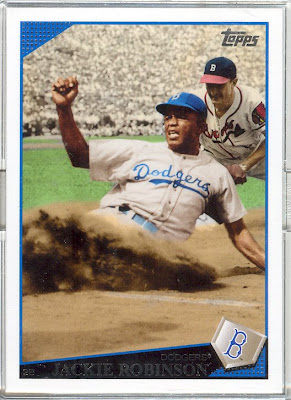 Jackie Robinson #30.
Good start, I thought. She had a Johnny Mize SP card too, but I already have that one. So, moving on...

One dealer happened to have a few complete sets of the 25 cards that are SUPPOSED to be used as this year's Topps Hobby promotion. For five bucks, I now have the "even-numbered" 2009 Topps Ring of Honor cards that were only supposed to be given away at the local hobby shop. Now, I know what you're probably thinking...I should have gone to my local shop and gotten them there. Well, I would have, but I've not had a chance to go there lately, and at least now, I don't have to spend just to get the one free card.

I have to give thanks to my daughter for bringing me to the next dealer that we stopped by, because this guy had two SP cards on him. And what a pair he had. It cost me $35.00 for both cards, but it was worth it: 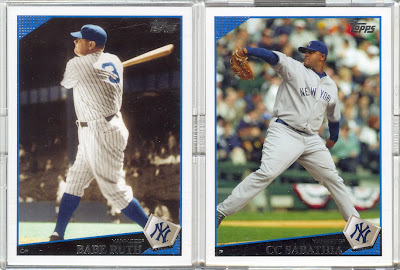 Babe Ruth #1. CC Sabathia #170.
If it was easier to trade for either card, I would have. But nobody had these out in the open, and I'm sure if they did, it would cost me an arm and a leg to get them. Now, I did expect that it would be easier just to buy the Ruth card, along with Gehrig, Obama, and Sabathia than it would be to trade for them. I was just happy to get the Ruth.

The next shop gave us a tip on another dealer selling SP's. By the time we got there, however, he had just sold the card "15 minutes ago." Just so I could agonize over it, I asked what card was that he sold? "Mel Ott." Ugh.

I am debating about going back tomorrow, but I don't think I'll be able too. The only thing I'd even want to get now are these three complete sets of Marvel Masterpieces by "Fleer," along with the Women of Marvel set. For $5.00 each, I should have just gotten them when I had the chance. Oh well...

So the number of SP cards I need is down to seven. I'm looking for cards for one of them (Foxx), and am hoping to get another one from another blogger (Campanella) soon. When all is said and done, I might be down to five by the end of next week (Gehrig, Ott, Obama, Munson, and Reese).

I love the Sun-Time shows and wished I would have gone this year. I was busy this weekend, plus didn't have the funds anyway. It is always a great show at the Rosemont Convention Center (along with the National).

The Ruth and Robinson are sweet looking cards (as they all are) and are the most expensive ones in the set, I believe. Good luck in your continued quest!