Here is another name that will probably make you scratch your head wondering, "Huh???" or "Who is this guy???"

The first time I ever heard the name John Montefusco, it was in a book I read when I was a lot younger called A Century of Baseball Lore by John Thorn. It was a book that was amongst the many that happened to show up one day when my family was trading hand-me-down clothing with another family. Anyway, back to the point. The story goes like this:

"San Francisco pitcher John "Count" Montefusco enjoyed a most productive freshman season: 15 wins, a 2.88 ERA, and 215 strikeouts, second in the league to Tom Seaver. Montefusco's exploits resulted in his being selected 1975 National Rookie-of-the-Year.

"But the cocky "Count of Monte Frisco," as he has been dubbed by his fans, took some lumps on the way to his laurels. After beating the Cubs in mid-July to lift his record to 10-4, the Count said he "couldn't wait till we play the Reds next week....I'm going to shut them out....I'm going to strike out Johnny Bench four times." Shades of Dizzy Dean.

"On July 31, Cincinnati's Riverfront Stadium was packed with Red rooters who wanted to see the Count make good or eat his words. The latter proved the case, as the Reds tallied in the first inning, and exploded for six runs in the second. The Count was driven into exile in the showers.

"The Reds rally was highlighted by a 460-foot, three-run homer of the bat of....Johnny Bench."

The last time I heard the name John Montefusco, he was one of the 21 players on the 2003 Topps All-Time Fan Favorites set that had an autograph card but no base card in the 150 card set (I have 20 of the 21 cards. The 21st has never surfaced because Tug McGraw was having health problems and there were only redemptions for his autos. I redeemed mine, and got a replacement card. If anyone has an actual Tug McGraw 2003 Topps ATFF autograph card, please let me know). 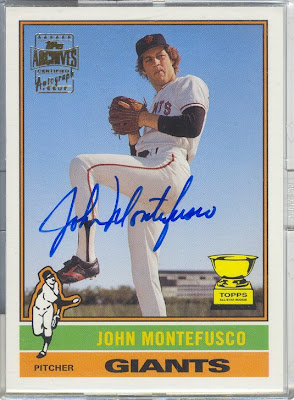 Other than those two times in my 22 years in the hobby/learning about baseball, I never really thought much about the "Count." But trying to come up with players for this 2011 Topps Archives project made me think about him again. So what did happen to Mr. Montefusco???

He played for 13 seasons in the majors for the aforementioned Giants, then was traded to the Braves at the end of the 1980 season. He played for Atlanta in 1981, then joined the Padres for a two year stint. He finished his career with the New York Yankees for a three-plus injury riddled years. He finished with a career record of 90-83, a respectable 3.54 ERA, and 1,081 strikeouts.

He was named to the All-Star team in 1976, and tossed a no-hitter against the Atlanta Braves in 1976. No Giants pitcher since then has thrown one. (Maybe this year's series 2 gimmick will feature Randy Johnson pulling it off...who knows???)

Since then, he's found himself in a bit of legal trouble, but has always proclaimed his innocence. He is now retired, and his name only comes up when a Giants pitcher comes close to a no-hitter (article courtesy of the San Francisco Chronicle).

If Bob Uecker can have an Archives card (and he did in the 2001 Topps set), why not the "Count?" While I can think of many players from the 80's and 90's (and even into the 2000's) who will join this set, I need to find players from years prior (and Andy Seminick will come up soon...I haven't forgotten). So to the "Count of Monte Frisco," you are now going to be remembered, thanks to the 2011 Topps Archives set: 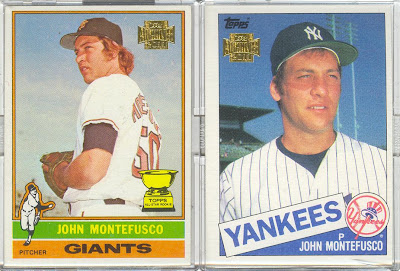 I didn't know much about John Montefusco but he seems like the type of player that would be interspersed throughout a set like Archives - just enough of an odd-ball to be interesting, while still having some redeeming numbers/credentials.

I agree. Perfect selection for 2011 archives. His nickname was even before the days of Chris Berman giving out nicknames.

Who are the others from the 2003 Fan Favorites set with autos but no cards? I didn't know that.

This looks like a cool project and I'd like to nominate a few players, but do you have a checklist for 2001 Topps Archives so I know who doesn't qualify for the 2011 set? I searched online and couldn't find a checklist.

You can go here:

It's broken down by team, but it lets you know who was in the set.