Unless you were grew up in the 1950's and 60's, or unless you are a die hard Yankees fan, you're probably looking at that name and going..."Huh???" Well, that's exactly what I thought when I opened a pack of 2002 Topps Archives: The Best Years. You remember that set? Of course you do. It was the product that was supposed to have carried on the success of the Archives product of the year before, but instead of reprinting the first and last cards of players, it reprinted the Topps card of that individual's "best year" in the majors. Oh come on, we talked about that set right here on this blog. Go ahead and read this post, then come back. Please come back.

Well, in amongst the Mays, the Dawsons, the Jacksons, the Ryans, and other stars that I did recognize, was a reprint card from 1958 featuring Kansas City A's Bob Cerv. Now the 1958 Topps set consisted of a player's cropped likeness in front of a colored background. Cerv's card featured him in a batting pose (which eerily looked like the one from 1957), in front of a lime green background. It looked like whoever cropped the picture took too much off the top as his cap looked flat on the player's right side. But that wasn't what I noticed. I just saw the name, and then asked (out loud), "Who is Bob Cerv???"

Well, Robert Henry Cerv was an outfielder on the New York Yankees who found himself on the Yankees-A's express. Let me explain.

You see, the guy who owned the Kansas City A's, Arnold Johnson, was the real estate partner of Del Webb, who owned the Yankees. Before buying and moving the A's from Philadelphia to KC, Johnson also owned Yankees Stadium and Blue's Stadium (it was home to the Yankee's minor league team at the time). Now according to Bruce Nash and Allan Zullo, co-writers of the popular books Baseball Hall of Shame, Webb held a second mortgage on Johnson totalling 2.9 million dollars. And, to make it more interesting, Webb owned the construction company that remodeled the Kansas City's Blue's Stadium to meet Major League Standards.

Because of Johnson's former business ties to the Yankees (plus the fact that the Yankees' owners pretty much owned Johnson as well due to the mortgage), many of the good players on the A's team were sent to the Yankees for guys who either needed a couple of seasons away from the spotlight, or players who were struggling in the Bronx in trades. From 1955 to 1960, "a whopping 59 players were exchanged in a series of 16 trades lasting six years" between the A's and the Yankees. And the Yankees almost always got the better end of the deal, basically making the A's look like the Yankees'minor league team. One of the players involved in these deals was Bob Cerv.

(Thanks to the Scout.com, The Hardball Times, and Bruce Nash and Allan Zullo of the Baseball Hall of Shame for the information).

Bob Cerv was a Yankee originally, but his rights were sold to the A's in 1956. In Kansas City, Cerv was the A's primary left fielder. And in 1958, which was truly his best season, Cerv hit an astounding .305 with 38 home runs and 104 runs batted in. It was also the year he made the All-Star team, and was fourth in the MVP balloting. Because of his power numbers (he did hit .285, 20 HR's, and 87 RBI's in 1959), the Yankees traded Andy Carey for Cerv in 1960. However, he did not produce in NY the way he did in KC, so he was exposed to the expansion draft at the end of the '60 season, being chosen by the LA Angels.

He didn't stay with the Angels for long, because one month into the 1961 season, he was traded BACK to the Yankees for Ryne Duren in a five player deal. The expansion Houston Colt .45's bought his rights in 1962, but released him soon after that. He never played in the big leagues again.

So why Bob Cerv? I don't really know. Does he really belong in a set like this? Maybe...maybe not. But he was a part of a very bizarre time in baseball history. If what happened in the late 50's between the A's and the Yankees happened now, rest assured there would be a lot of backlash. But there was not any back then. The Yankees dominated the 50's, while the A's dominated the bottom of the AL standings. But Bob Cerv was one of the few bright spots on a few horrible A's teams. 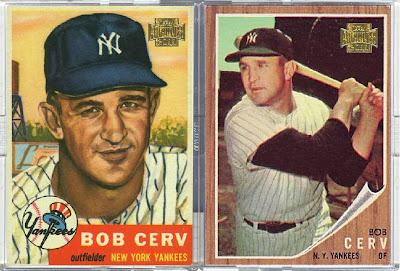