If This is His Topps Card, Then What Card is This?: Brad Wilkerson

What does the baseball card of the "face of the franchise" look like when that player gets traded at the end of the year? We're about to find out on this week's edition of "What Card is This?" Our subject was a Montréal Expo, and made the trip to Washington, D.C. in 2005. "When he goes, the team goes," one opposing GM said about him, "He's clearly the leader of that team." After five years of playing in the obscurity in Montréal, and then playing in the nation's capital, he finds himself traded to the Texas Rangers. This week's subject is Brad Wilkerson.

Brad Wilkerson gave plenty of Expos fans plenty to cheer about during the team's final seasons in Montréal. During the Expos' swansong in 2004, he hit a team leading 32 home runs, showed amazing patience at the plate by taking 106 walks to first, and stole 13 bases.

He was the first Washington National to make a plate appearance, collecting the teams first hit in that historic at-bat. He even hit for the cycle in the team's second game. As the team's leadoff hitter, he hit .248 with 11 home runs, 57 runs batted in, walked 84 times, and stole 8 bases. Not necessarily great numbers for a leadoff hitter, but then again, these were the Nationals. So why was he traded after the 2005 season to the Texas Rangers? Oh that's right, so the Nationals can get All-Star Alfonso Soriano to play for them in 2006.

His time in Texas was less than stellar. He found himself on the DL for parts of the year, and his power numbers slipped dramatically. He signed with the Mariners in 2008, only to find himself released in May. He signed on with the Blue Jays, and finished the year with a measly .220, 4, and 28. In 2009, he is looking to regain his form with the Boston Red Sox.

So in 2005, he was a National. He was traded to the Rangers in December of that year. Because of the "new" MLBP rules, Topps could not distribute their 2006 Topps Baseball cards until February of 2006. That gave them a bit of time to make a few adjustments to the cards of players traded or signed to new teams early enough to get them with their new teams. However, something was missed between editing and printing because while indeed Brad Wilkerson's 2006 Topps card does label him as a Texas Ranger (in big foil letters above the picture), he is pictured wearing the red and white of the Washington Nationals. Here is Wilkeson's 2006 Topps card #35: 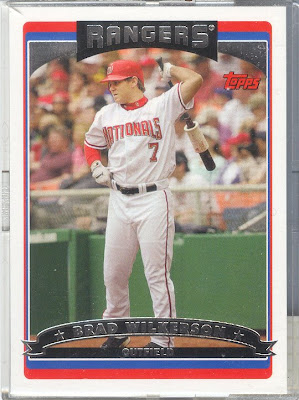 Topps could have (or for that matter, should have) just left the team name alone instead of changing it. As a team collector, where would you put this card? Is he a National? Is he a Ranger? What's the call here? So if the first card was in the Topps set... 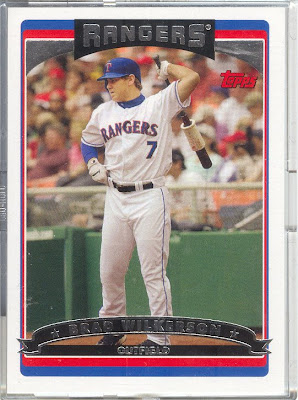 Now he's wearing the blue and white of the Rangers. But wait, it's the same photo. He's in the same stadium in both pictures, so obviously Topps altered his jersey to show the new team. So the question on everyone's mind now is...

Answer to come later this week. Have fun.

I can't believe I forgot to put the answer on here until now.

Anyway, this card is from the 2006 Topps Rangers 14 Card set. Friend of the blog tdlindgren gets credit for being the first to respond with the correct answer.

I just took out my 2006 Topps binder just to look over the cards once more, and I didn't realize that there are a number of cards that are similar to Wilkerson's in terms of being included as a member of one team but pictured in another team. What??!

Email ThisBlogThis!Share to TwitterShare to FacebookShare to Pinterest
Labels: 2006, topps, What Card is This?

My guess is that the card was in the Topps Team Sets that you get a retail outlets or at the Ballpark.

Yeah, it's got to be from the team sets. The Opening Day card of him also features him in a Ranger uniform.

As for where do you put the first card--I say in the Ranger's folder. Same thing happened with Kenny Rogers in 2006, pictured in a Rangers uniform but with Tigers on the label. (Upper Deck did the same thing last year with Renteria & Jacque Jones, who were both pictured in their old uniforms but listed as Tigers). Maybe it's just me, but whatever the label says, goes in my opinion


I also agreed with you.In my point of view this card is support to the baseball players at the end of the year.

I agree with Grand cards - in the Rangers folder.