Take Me Out to the Ballgame... 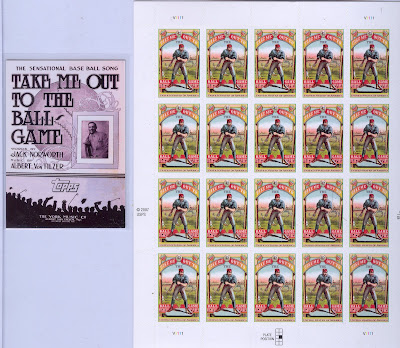 I was thinking about mailing this one in...how much in postage is it going to cost me???
It's been one hundred years since a guy who had never even been to a ball game, looked up at an advertisement and began penning what would become one of the most commonly sung tunes in America today. Jack Norworth wrote the words (changed the name of the heroine in the song almost twenty years later), Albert Von Tilzer wrote the music to go with it, and the rest, as they say, is history.

Now even non baseball fans know that at Wrigley Field, since Harry Carey passed away, the Cubs have had guest conductors lead the crowds to sing the chorus of the song. Sometimes, when there are enough fans of the opposing team, it gets really tense before the seventh inning stretch. Only because the conductors normally swing the microphone to the crowd when it's time to name the team (normally "Cubbies"), only to hear the name of the other team chiming in at the same time. It gets even more interesting when the Cubs have the opposing teams' broadcasters lead the crowd. Many will just let the crowd sing the name, a few will say the name of the team he broadcasts for anyway, just to rile up the crowd (you may never hear Marty Brennaman asked to perform this task ever again...)

Now two of the best "conductors" I've ever heard lead the crowd are broadcasters of the Cubs opponents. Vin Scully of the Dodgers sang the song so beautifully, it out rivals many of the performances done by actual singers. And he even "root, root, rooted" for the Cubbies (he didn't swing the microphone to the crowd, but he went along with the traditional Wrigley Field Lyrics.

But the all-time best guest conductor has to be Bob Uecker, long time radio voice of the Milwaukee Brewers. When the Brew Crew comes to Wrigley, many Milwaukee fans make the trip down to Wrigley, and the crowd's loyalties split 50-50. Normally, when it comes time to sing the team, both "Cubbies" and "Brewers" could be heard when the microphone is aimed towards the crowd. Mr. Baseball, however, had other ideas. He sang the song, holding the microphone the whole time, and when it came to the critical lyric, he sang,

"So I'll root, root, root, for the Brewers...You do the same for the Cubs. For it's..."
He may have his loyalties with the team he works for, and he may have sung his team's name, but at least he was respectful enough to the Cub fans singing for them too, asking that Cub fans root for their team in the same fashion he was going to root for his team. Now it has been said that the crowd may have drowned him out to a chorus of boos to the point where he may not have been heard at all at Wrigley. But you could hear him clear as day on the radio, and hearing him sing that one line, showed how classy a human being Uecker is.

Topps included a insert card honoring the 100th birthday of TMOTTB. The US Postal Service commissioned a stamp for the anniversary as well. I think this is the first time these two collectibles are seen together (at least publicly on a blog, someone can prove me wrong of course). Now I just have to find a place for them.

P.S. One guest conductor I'll never forget is Jeff Foxworthy. In Chicago for one reason or another, he led the crowd to sing one afternoon. Before the stretch, he was talking with Pat and Ron on WGN radio and his first words to them were, "Thank you for having me here. And thank you very much for Greg Maddux." Took me a second to remember that he's from Atlanta. Even I had to laugh at that one. jba
Posted by James B. Anama at 7:15 PM

Email ThisBlogThis!Share to TwitterShare to FacebookShare to Pinterest
Labels: 2008, insert, other collectibles, topps, updates and highlights

when the tigers played at wrigley in '06 we totally drowned out the fans, had the whole place yelling "TIGERS!". the sunday game's conductor was jeremy piven (who was just at the beginning of his "entourage" fame) and caught some heat from families 'cuz before he started he screamed "let's hug it out bitches!" and he sung "buy me some peanuts and CRAAAACK!" i think he had a few one too many olde styles that day... but then again so did i.

By the way, I was at KMart today and saw no Updates & Highlights packs at all, so no luck on the insert chase.