When Sending Extra Cards in a Trade...

Please be sure that when you're sending extra cards in a trade that the card you are actually trading is in with the package. What do I mean??? Let me explain.

Remember a while back I was lamenting about my crisis when it came to trading for the 19 SP cards? Well, I put in a post script saying that the fourth guy had agreed to send me one of the cards I needed. Well, the package arrived today. And when I opened it, I pulled out a container that for some reason had some 2009 Topps Gold cards in it. Now, many times when I get cards in the mail, whether by trade or by the Bay, some people will include "junk" cards in the package, probably to keep the card I actually bought or traded for safe from the usual mail calamities (being bent, lost, loose in the package, whatever). Many times, I get checklists, sometimes I'll get some 80's Donruss or Fleer. A few times, I'd get those thick UD filler cards (the ones used to deter pack searching). This is the first time I have ever received something decent amongst the filler cards.

So I open the package, and flip through the cards. These are nice. Included amongst the golds are Albert Pujols, Miguel Cabrera, Bud Black, Greg Golson, Juan Pierre, Hunter Pence, Jason Giambi, Aubrey Huff, and Brendan Harris. But wait...where was my SP card??? This was nice and all, but I don't see the card I actually traded for in here. Did I get somebody else's package by mistake? That has happened. Even I've done this when selling online. I'm not angry...yet.

I send an e-mail to the person I traded cards with, telling him that I got the package, received some ToppsGold cards, but I didn't see my card. He responds that the card should have been in amongst the gold. I told him that I'd check later tonight.

When I returned home, I looked at the cards again, and counted 1...2...3...4......9. No SP card. I e-mailed the person again, and told him, "Nope, the card isn't here." He replied that he'll look. A few minutes later, I grabbed the envelope that came in the mail to put the cards back into it. I looked inside, and there was still something inside there. Something I missed entirely when I opened the envelope this morning. I pulled the toploader out of the envelope, and I find: 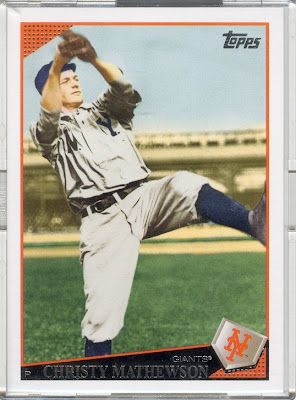 Christy Mathewson #195.
Needless to say, another e-mail was sent to the person saying that the card had indeed arrived with the extra golds.

To Dorrey Kimber from the Topps Message Boards, thank you very much for the card. And once again, I am sorry for the confusion. Thank you also for the extra golds cards.

JayBee Anama
Posted by James B. Anama at 3:25 AM

This is That Was Great said...

Wow very rude. I hope you apologized profusle, next time check the package completely, and be sure to thank him for sending extra gold cards, a Pujols gold is better than the SP you wanted in the first place. Yo sound a bit like a spoiled brat who doesn't know how to look in the first place, complaints like this are uncalled for.But besides this, I love the blog!