A Quick Thank You to the Girls at Dinged Corners

I have to get to work in a couple of minutes, so I'll make this really quick.

I received a package from the Patricia and Lucy at Dinged Corners last night. You see, a few months ago, I sent them a David Wright card that I knew they would like. And sure enough, they did. They posted on their site later on that they got one of the 2009 Topps Shortprints in a pack that they opened for the blog. I had contacted them, asking if they were willing to trade for it. They agreed.

So the card(s) arrived last night (will explain in a second). Here is the card they sent to me: 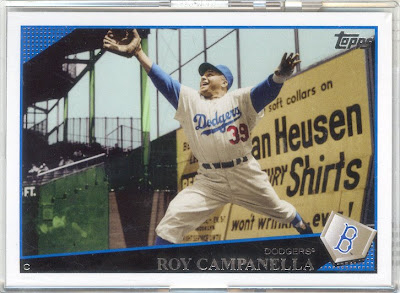 Roy Campanella #210.
Along with the Campy card, they included 10 cards from the new 2009 Topps Attax set, all of which my daughter nabbed and asked if she could keep them. In the spirit of giving, I let her have them. Amongst the ten was a John Lackey foil card, David Ortiz, Aaron Rowand, and seven other players I can't think off the top of my head (she put them in her binder and wants to know where I can get more...)

So to Patricia and Lucy, on behalf of my daughter, thank you very much for the cards.

JayBee Anama
Posted by James B. Anama at 9:39 AM

JayBee, that is very cool.