Topps Insert Set of the Week: 2001 Topps Through the Years

(All the insert sets I've written about so far have had anywhere between 8 and 15 cards. They were easy sets to write about only because the number of subjects were small. I am now going to attempt to wax poetic about a set that is truly near and dear to my heart. And there are 50 cards in it.)

There are many reasons why the collection that I have has grown leaps and bounds from just complete sets to full master sets. Among them is eBay. I can thank eBayers for allowing me to buy full sets from 1976, 1977, 1979, 1981, and 1982. I have purchased many complete insert sets as well, as almost all of them have been purchased through the Bay. But I would have never considered adding insert sets to my collection until the day I saw our Insert Set of the Week for the first time.

In 2001, Topps celebrated their 50th anniversary in the baseball card Hobby. To celebrate this historic milestone, Topps brought back many special subsets into their eponymous set (Managers for the first time since 1993, the first team cards since 1982) and a number insert sets, bringing together legendary players from the past, present day superstars, and those who would create an impact in the future. Among the insert sets that came out in 2001 Topps Series I that perfectly capture this ideal were the 50-card 2001 Topps Golden Anniversary set which could be split into five different 10-card subsets (Golden Greats, Gold Nuggets, Glistening Gold, Hidden Gold and Going for the Gold), and the Topps Combos set, where each card artistically brought together past and present players in a baseball setting.

Inserted into packs of 2001 Topps Series I baseball (1:8 hobby/retail, 1:1 HTA - Home Team Advantage dealers), 2001 Topps Through the Years was a reprint set that brought back 50 years of Topps designs together. It was nothing new to include reprinted card-insert sets into packs of Topps cards because during the five years prior, Topps reprinted the entire catalog of Mickey Mantle (1996 & 1997), Willie Mays (1997), Roberto Clemente (1998), Nolan Ryan (1999), and Hank Aaron (2000 + a 1985 Mark McGwire) cards. Combined, those five sets reprinted cards from 1952-1993. The 2001 effort included cards of other players from 1952 to 1999. From Jackie Robinson to Mark McGwire, Ted Williams to Wade Boggs, each subject chosen were major stars in the decade they were portrayed (50's through 90's). Each card also included the 50 Year logo that graced all the 2001 Topps cards. 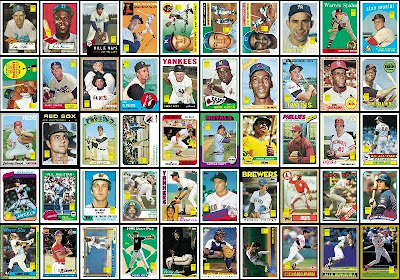 There are a few headscratchers within this set, like the Ted Williams card that misspelled his name. The 1989 Topps Ryne Sandberg card looks like the original card was scanned, but the bottom right corner where the team and player's name may have appeared blurred, so Topps tried to put a clearer "nameplate" in, only to still show part of the original corner. The 1982 Ripken card did not include his two co-future stars Bob Bonner & Jeff Schneider, and because the original card was pictured horizontally, seeing a larger, vertical picture of Cal looked strange. And both McCovey's and Jeter's cards, while they do look nice, don't show the actual design of the regular players' cards.

After getting these cards, I thought, why not get the other five reprint sets (Mantle, Mays, Clemente, Ryan, Aaron). When I did acquire and receive the other five on the Bay, the first thing I did was lay all six sets on the carpet and line them up by year. It looked like a timeline in baseball history. That's what this set was. A timeline, a journey into both baseball's and Topps' past. Remembering the players whose images graced these little pieces of cardboard and made an impact in the game. (Did you know there are two Topps sets that all five players appeared within the same set? Can you guess which years they were?)

When Topps introduced their Traded card series at the end of the year, they reprinted 45 cards from the Topps Traded series (1974, 1976, 1981-1995, 1999) and incorporated it as a subset. It would have made a nice supplement to the regular inserts, but it was nice that it was part of the main set. The 2001 Topps Through the Years cards were also the inspiration for the Archives series, which reprinted the first and last cards of more than 200 players and managers. It has been repeated as an insert concept with 2006 Topps Wal-Mart. But that set featured new pictures within the catalog of designs.

Topps did an excellent job creating this set. It became the catalyst for me wanting to collect all the insert sets I could find. I made a goal of it on my eBay About Me page. And since that time, I've just about accomplished that goal. So now when I collect cards during the year, not only do I try to complete the regular set, I go for the insert sets as well. They always make a nice addition to the regular set.

P. S. The 2011 Topps set is only three years away. Topps will be celebrating 60 years in the Hobby. Could you imagine them doing another set like this? If Topps created a ten card addition to this set, featuring reprints from 2000-2009, who would be included? Who knows. jba
Posted by James B. Anama at 6:07 PM

I love this set. Hank Aaron was the last one I needed to complete the sucker. The reprints in the 2001 Traded set were sweet too. I hope they do another Archives or through the years set like this soon.